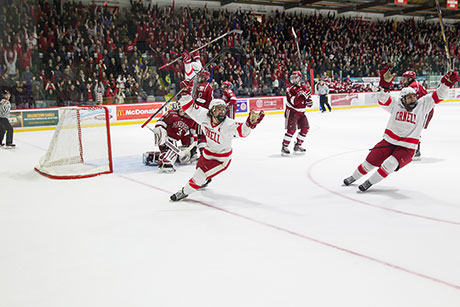 To fend off climate change and help to sustain the Earth, this is a slam dunk: the Department of Athletics and Physical Education has begun to install new LED lights at all campus athletic facilities including Lynah Rink, Bartels Hall, Newman Arena, the Friedman Wrestling Center and the Oxley Equestrian Center.

Formerly fitted with high-pressure sodium and metal halide lights, the new LED lights – from Ephesus Lighting – will replace the older fixtures. The project annually will save more than 1.7 million kilowatt hours of electricity, which reduces utility bills by about $136,000. This is estimated to prevent about 450 tons of carbon dioxide annually, or the equivalent of electricity used in a year by about 200 residential homes. The project will cost about $1.1 million and will receive an incentive of over $440,000 from the New York State Electric and Gas Corp.

The older metal halide fixtures required about 20 minutes to warm up. With a flick of the switch, the new lights turn on instantly.

How good are these lights? The upcoming Super Bowl Feb. 1 in Phoenix between the New England Patriots and the Seattle Seahawks will be the first NFL championship game played under LED lights, also provided by Ephesus Lighting, based in Syracuse.

Mark Howe, campus energy manager in Facilities Services, said the LED lights have an extremely long life – about 130,000 hours. The lights will likely need replacing in about 25 years, since there is no bulb or ballast to maintain. “This light will have an improved light dispersion pattern creating better light uniformity, a better fan experience and enjoyment because of visibility, and improved player and participant performance,” he said.

The Lynah Faithful may notice that the LED lights eliminate shadowing on the ice, and the ice remains cold and firm due to the significant reduction of ambient heat, Howe said. High-definition television viewers can also follow the action better with the improved lighting, he said.

Bill Courtney, the Robert E. Gallagher ’44 Head Coach of Men’s Basketball, praises the brilliance of the new lights. “Every student-athlete wants to play in the best environment possible, and the new LED lighting enables that. Photographs look more crisp, and the video is more colorful,” he said. “The ability to light the Newman Arena court is on par with major college facilities across the country.”