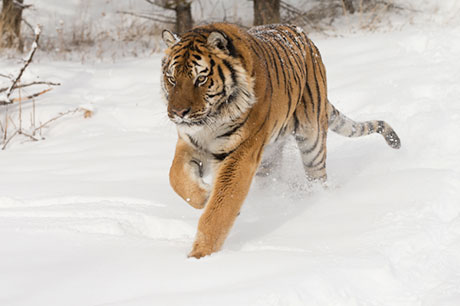 Tigers, lions and other wild carnivores, already under threat from poaching and habitat loss, are falling victim to a virus that could soon drive endangered populations to extinction.

Scientists from the Wildlife Conservation Society, Cornell and the University of Glasgow are urging swift action to address the crisis by developing control measures for the virus, such as delivering a vaccine that is safe for these animals. They also suggest renaming canine distemper virus to reflect the wide range of animals that can carry the virus and suffer from the disease.

“These small endangered populations of carnivores face a lot of threats, but distemper can be the straw that breaks the camel’s back in terms of their survival,” said Colin Parrish, a virologist and director of the Cornell Feline Health Center, a co-sponsor of a Jan. 21 meeting that explored options for vaccinating at-risk wild carnivore populations against distemper. Canine distemper virus is closely related to the virus that causes measles in humans.

Parrish said Amur tigers are under particular threat because they number in the hundreds and many live in sub-populations of fewer than 25 breeding adults. Between 2007 and 2012, canine distemper contributed to the decline of one well-studied population of Amur tigers from 38 to only 9, a reduction the group may not be able to recover from, Parrish said. Similarly, more than 1,000 lions in the Serengeti National Park disappeared in an outbreak of distemper that began in 1993 – a population decline of about 30 percent.

Studies show that in many cases, wild carnivores are not contracting the distemper virus directly from domestic dogs, but they are getting it from other wild animals that act as intermediaries. This makes controlling the virus exceedingly difficult, Parrish said, and efforts to vaccinate dogs or other wild carnivores may not offer protection for tigers or other large cats.

Meeting participant Edward Dubovi, director of the virology laboratory at Cornell’s Animal Health Diagnostic Center, says because of this disconnect between dogs and animals like tigers and lions, “the most logical approach for protecting threatened carnivores from canine distemper virus may be to target the vaccine on the endangered species itself.”

The situation is urgent, but current distemper vaccines haven’t necessarily been thoroughly tested in the wild species that need protection. While many vaccines appear to be safe, some may not be effective in generating long-lived immune defenses, Parrish said. The group discussed ways to test the safety and efficacy of distemper vaccines in captive animals as well as developing innovative means of immunizing wild animals with oral or aerosol formulations planted in bait or on marking posts.

Renaming the canine distemper virus may be in order, Parrish said, in part  because the name is not a good reflection of its host range among carnivores; the virus can affect seals, tigers, bears and more. Also, the word “canine” can lead to management efforts that place too much emphasis on controlling the infection in dogs, when other wild animals carry the virus to infect other species.

The fact that canine distemper can kill wild carnivores like tigers, lions, giant pandas and other species has been known for decades, but the problem seems to gain and lose the attention of the global community in a predictable cycle. Meeting participant Andrew Allison, a postdoctoral fellow at the Baker Institute for Animal Health in Cornell’s College of Veterinary Medicine said the time to act is now.

“Rather than waiting for the possibility of future outbreaks and more extensive population declines to intervene, addressing the issue before it potentially causes irreversible impacts to tiger populations is likely the most important step,” Allison said.

An announcement by the Wildlife Conservation Society describes five actions recommended by the scientists who attended the "Vaccines for Conservation" forum.

Merry R. Buckley is education and outreach program coordinator for the Baker Institute for Animal Health and the Cornell Feline Health Center.