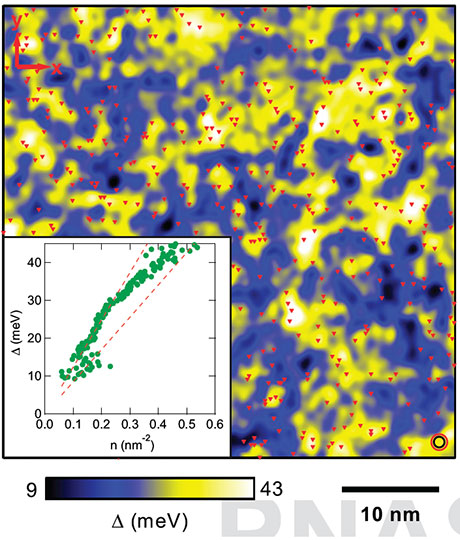 Davis lab
Scanning tunnelling microscope image of a 47-nanometer square area of the surface of a topological insulator showing variations in the Dirac-mass gap - a measure of conductance - from high (yellow) to low (blue). Red trianges are chromium atoms, concentratd in the high gap areas. The inset plots the correlation between Dirac-mass gap and chromium atom density.

Exotic new materials called “ferromagnetic topological insulators” were supposed to be the next big thing, offering potential breakthroughs in electronics and new insights into the physics of solids – but it hasn’t happened.

Researchers at Cornell and Brookhaven National Laboratory have found out that tinkering with the materials to make the insulators work has actually introduced a disorder that spoils the desired effects. Their discovery is reported in the Feb. 3 edition of the Proceedings of the National Academy of Sciences.

Topological insulators are insulators in bulk, but an electric current flows smoothly on their surface. “They are very weird compounds with a conducting sheen one electron thick,” explained J.C. Seamus Davis, Cornell’s James Gilbert White Distinguished Professor in the Physical Sciences and a senior physicist at Brookhaven. “For five or more years people have been trying to develop all the exotic potential, but with very few results.”

Theorists predicted that topological insulators might be used in new kinds of electronic devices, including quantum computers, and that they could display unusual physical phenomena, including simulations of magnetic monopoles or of axions – particles theorized to be associated with dark matter. To make these things happen, theory says, the conducting electrons would have to be exposed to a high magnetic field that would lock them into a particular quantum energy level – roughly, the amount of energy it would take to yank an electron out of the system – where they are “protected” from change.

So materials scientists synthesized new versions of topological insulators “doped” with atoms of magnetic elements, such as chromium, making them “ferromagnetic.” Still, none of the expected phenomena appeared.

“We have to find those magnetic atoms and look at their relationship with the electrons,” Davis said. “This is right up our alley.” Davis has designed and built several ultrasensitive scanning tunneling microscopes (STMs) that can move a probe across a surface in steps smaller than the diameter of an atom, and read the energy levels of electrons under the probe.

Chung Koo Kim, a former member of Davis’ research group at Cornell and now a member of his group at Brookhaven, used a specially built STM to scan a sample of a topological insulator composed of bismuth, antimony and tellurium doped with chromium atoms. Magnetic fields of the chromium atoms interact with those of the electrons to give them what physicists call a Dirac-mass. Just as the inertial mass of a physical object resists moving the object, the Dirac-mass of an electron resists moving it through a conductor.

Stopping at each point on the scan, the STM measured the energy levels of electrons under the probe, finding that the movement of electrons through the conducting surface – and therefore the Dirac-mass – was very different from place to place. The scan also showed the locations of the chromium atoms, which are distributed randomly around the surface, and the most disorderly regions were in the vicinity of those atoms. The very atoms that protect the energy levels of he electrons are also the source of the destruction of the promised effects, Davis noted.

“The Dirac-mass chaos eventually destroys the exotic surface state,” he explained. “This new understanding will likely result in revisions of the basic research directions in this field.” One possible approach, he said, might be to somehow synthesize materials in which the magnetic atoms are arranged in orderly rows. Another would be to apply a very large, uniform external magnetic field.

The research is principally supported by the U.S. Department of Energy and the FlucTeam program at Brookhaven National Laboratory.