A 3-inch East Coast killifish can jump across land and navigate from one tide pool to another – a finding that could give insight into how sea creatures first made the transition to land, according to research by a Cornell undergraduate.

Noah Bressman ‘16 has described for the first time how killifish (Fundus heteroclitus), also known as mummichogs, use an unusual upright jumping behavior to find water and navigate on land. Mummichogs leap out of pools of water onto land, and then use their tails to jump inches into the air. Once airborne, the fish put their heads straight up to get a better look around and to search for nearby pools.

“The uprighting behavior takes only 0.12 seconds, so you can’t see it with the naked eye,” said Bressman, who presented his findings in January at the 2015 Society for Integrative and Comparative Biology annual meeting in West Palm Beach, Florida. He was a finalist at the meeting’s Division of Comparative Biomechanics poster competition.

Provided
Mummichogs leap out of pools of water onto land, and then use their tails to jump inches into the air.

Bressman collected his data over the summers of 2013 and 2014 at Shoals Marine Lab, a Cornell and University of New Hampshire-administered undergraduate teaching facility on Appledore Island off the coast of Maine. The Mellon grant also allowed Bressman to stay on the island during the summer of 2014.

During the summer of 2013, Bressman attended the Anatomy and Function of Marine Vertebrates course at Shoals, when one morning he discovered a mummichog had jumped out of a sea table – a table with 6-inch walls around the edges and filled with water – and was still alive on the floor some 15 feet away. The following day, he found another live mummichog in the exact same spot. These observations spurred his investigations. 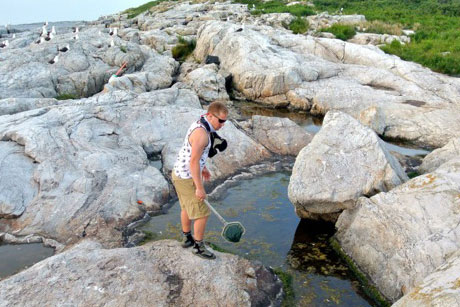 Provided
Bressman fishes for mummichogs at Appledore Island during summer 2014. 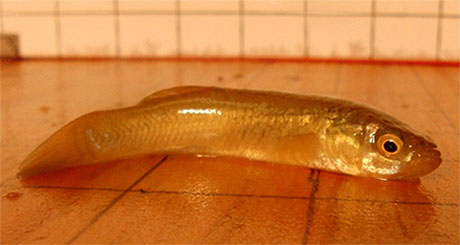 Noah Bressman '16
Mummichogs are killifish native to the U.S. East Coast, from Canada to Georgia, that live close to shore in intertidal zones and tide pools, and can partly breathe air and survive out of the water for hours at a time.

When Bressman returned to Shoals the following summer as a teaching assistant for the marine vertebrates course, he started an experiment, putting mummichogs in the center of a table with water on one side, giving the fish a 25 percent chance of randomly moving towards the water.

He then tested the fish’s movements in light and dark conditions, and in a third condition where he replaced the water with tin foil. He found that most of the fish navigated towards the water in the light condition, and also towards the shiny tin foil, but they were unable to successfully navigate in the dark.

“Vision and the mirror reflection were very important in navigation,” Bressman said. “I determined [the reflection] was probably what they were looking for when they went towards the water.”

He also realized why those two fish in the summer of 2013 ended up in the same spot on the floor.

“Retrospectively, I realized that the spot that the mummichogs went towards was the first place where the sunlight shined in the morning,” he said.

Mummichogs are native to the U.S. East Coast, from Canada to Georgia, live close to shore in intertidal zones and tide pools, can partly breathe air and survive out of the water for hours at a time.

Along with Farina, Alice Gibb, a biology professor at Northern Arizona University and an expert on fish jumping on land, is a co-author on the poster.