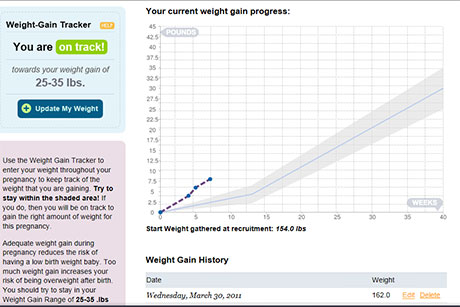 Christine Olson
This weight-gain tracker proved to be an effective tool in the the e-Moms Roc intervention.

Websites and phone apps that offer information and tools can be effective in preventing major weight gain and obesity associated with pregnancy, according to Cornell studies.

These so-called e-interventions provide alternatives for doctors and other health-care providers, who often lack time to counsel pregnant women on the importance of healthy diets, physical activity and tracking weight, the researchers said.

“Pregnant women often ask their health-care providers many questions that they don’t have time to answer. But if providers can say, ‘go to this web site,’ then that can be very helpful,” said Christine Olson, professor of nutritional sciences.

Olson is senior author of two recent studies looking at the use of e-health tools by pregnant women, as little is known about how these tools are used and who is using them.

According to several other recent studies, one-quarter to one-half of pregnant women in the U.S. end up 10 pounds heavier one year after giving birth, which increases their risk of future obesity. Furthermore, doctors are concerned that women who retain at least 10 pounds from a first pregnancy and become pregnant again are at increased risk of needing a cesarean delivery. Their children also have an increased risk of obesity as they grow up.

One study, published last year in the Journal of Medical Internet Research, was led by first author Margaret Demment, a postdoctoral researcher in nutritional sciences. The study describes a randomized intervention group of 1,014 racially and socio-economically diverse pregnant women from Rochester, New York. The study grouped women by demographics and weight, and teased out differences in how the women used the web tools.

Close to 88 percent of the women logged onto the website during pregnancy. Among the interactive tools, the weight gain tracker was the most commonly used feature. Across four demographic subgroups – young black women, heavier black women, Hispanic women and white women – the most engaged site users tended to be white and higher income, while nonusers were mostly minorities, some of whom were also at higher risk for excessive pregnancy weight gain. More than a third of the women across all three minority subgroups frequently used the weight gain tracker.

“This intervention does have the potential to reach a large proportion of all of the population subgroups,” Olson said.

A second study, published in December in the journal Telemedicine and e-Health with nutritional sciences research support specialist Meredith Graham as first author, examined how the interventions were used. All the participants had access to articles, blogs and other resources, while some participants also had access to the weight tracker and goal-setting tools.

Overall, 80 percent of all the randomly assigned women logged onto the website and used a tool or feature at least twice. Among those with access to all the website features, 70 percent used the weight gain tracker, but only 40 percent used the diet and physical activity goal-setting tools. The results will help researchers predict effectiveness of e-interventions.

“I think the use of the Web for health interventions is the wave of the future,” with smoking cessation and weight-control sites already gaining popularity, Olson said.