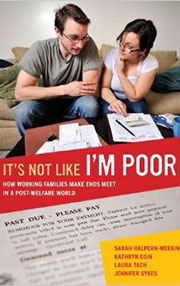 The College of Human Ecology’s Laura Tach and her co-authors must have trustworthy faces. Working-poor recipients of the Earned Income Tax Credit (EITC) in Boston divulged things they’d never tell the Internal Revenue Service – like what they think about taxes and what they do with their refunds.

The wage-supplementing EITC is the largest anti-poverty program in the United States (those with two children could receive a check for $5,372 in 2013, for example), and the federal program elevates millions of American families above the official poverty line.

Unlike the many Americans who dread tax season, the researchers found that families who received the EITC looked forward to tax time; some parents said it was “like hitting the lottery” or “better than Christmas.”

When they asked interview subjects what they did with their tax refunds, the academics found little evidence that people blew their windfall on frivolous things. Instead, paying down credit card debt – or paying ahead on expenses like auto insurance – were among plans for many EITC recipients. Others vowed to repay friends or family who loaned them cash in the lean winter months before the tax “windfall” came. “Treats” turned out to be small in dollar value but deeply meaningful: a wished-for toy for the child Santa somehow forgot. Or a once-a-year family dinner at Red Lobster.

If any of the Boston families were tempted by Walt Disney World’s “Share a Dream” commercials running this time of year, virtually none succumbed to TV temptation. However other ads – for franchised tax preparers – did captivate anxious EITC recipients. The authors scolded outfits like H&R Block for outsized fees and usurious interest rates charged to low-income tax filers. On average, about 2 percent of EITC checks went to short-term loans and basic tax prep, the authors report.

The book’s title is an actual quote from one parent. “It’s not like I’m poor,” Tach and her co-authors observe, points to a curious predilection: Because the EITC raises the incomes of so many, some low-income beneficiaries of the federal anti-poverty program regard themselves as middle class Americans – a struggling middle class who look down on “welfare cheats” but are confident nevertheless that upward mobility is theirs to claim.

“While their work buys them both government assistance and the aspirations for more, the labor market for less-skilled workers makes it unlikely they will realize their ambitions without help,” the authors conclude.

They urge “greater investment in skills so workers can claim higher-wage jobs” and a redesign of wage supplements like the EITC. Those measures, the authors believe, can bring stability to family finances, offer incentives to eliminate debt, save scarce resources “and help families work toward a brighter future.”

Tach, assistant professor of policy analysis and management in the College of Human Ecology, is a sociologist who studies how social policies affect urban poverty and family life.