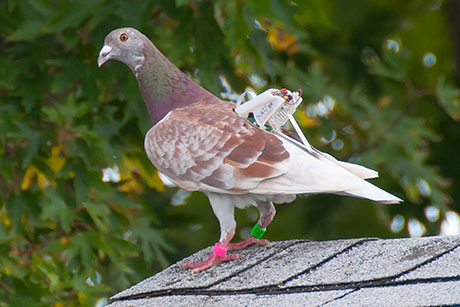 Michael Shafer
The image shows a prototype for a bio-data collector for birds, which relies on a pendulum that resonates with a bird’s wing-beat frequency to generate electricity. The prototype was tested on trained pigeons that would return the device.

A technology that generates electricity from the beating wings of birds, bats or even moths could produce enough power to run a device that collects data – such as location, migration habits or vital physiological statistics – used by biologists.

A study, published in January in the journal Smart Materials and Structures, describes how advancements in microelectronics and harvesting of vibration energy made it possible for researchers to create a prototype “bio-logging” device.

Biologists and ecologists who track flying animals typically use devices that rely on small, lightweight batteries, which can last as few as five days. Solar-powered devices have a longer life span, but energy must be stored to track animals at night.

“We came up with a good application for animals that fly as a portion of their daily behavior and is useful for nocturnal animals,” said Ryan Shipley, a graduate student in the field of ecology and evolutionary biology and a co-author of the paper. Michael Shafer, Ph.D. ’13, assistant professor of mechanical engineering at Northern Arizona University, is the paper’s lead author.

“As long as the animal is in motion, we can generate power from their movement,” Shipley said.

That power is generated via piezoelectric technology, which uses crystalline structures that generate an electric charge when in mechanical stress, such as being bent. Piezoelectricity was first discovered by brothers Pierre and Jacque Curie in 1880 and was used during World War II in SONAR, where echoes generate a current to detect submarines.

One challenge for building a device was that it had to be light enough, under about 5 percent of a bird’s or bat’s overall mass, so as not to affect their flying ability and behavior. The researchers calculated wing-beat frequencies and the amount of potential energy produced based on a bird’s size.

They developed a bio-logger prototype, a small backpack with a pendulum that resonates with a bird’s wing-beat frequency to generate electricity. The prototype was tested on trained pigeons that would return the device.

They created “a self-powered device that can be used to harvest flight data during the normal day of a pigeon,” said Shipley. Future work will further test such devices.