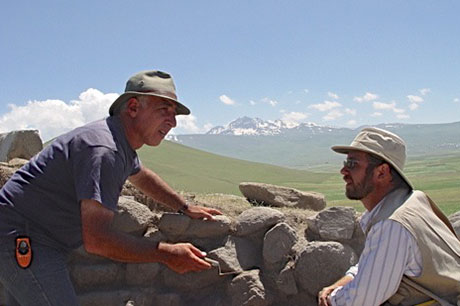 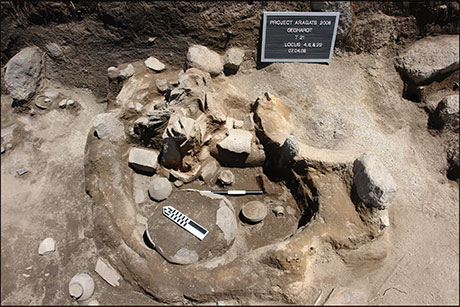 Provided
Artifacts uncovered at one of the Gegharot citadel shines are evidence of political divination, archaeologist say.

Trying to divine the future of a precarious administration, “House of Cards” President Frank Underwood enters the inner sanctum with a trusted adviser. “It’s really a crapshoot,” the adviser says, and the president nods. The bourbon is drained, cigars are snuffed, and the political leader emerges with a more confident sense of what’s to come.

“It really was a crapshoot, with very high stakes for sovereign rulers in a turbulent time,” says Cornell archaeologist Adam T. Smith, interpreting evidence from 3,300-year-old Bronze Age shrines, ensconced within a hilltop fortress on the Tsaghkahovit Plain of central Armenia. Smith, a professor of anthropology in the College of Arts and Sciences, studies the role that the material world – everyday objects, representational media, natural and built landscapes – plays in the political lives of ancient and modern-day people.

Dice-like knucklebones used for osteomancy and colored stones used for lithomancy (divination with bones and stones, respectively) were found deep within the ruins of the fallen citadel of Gegharot. Aleuromancy (divination with freshly ground flour) is a likely explanation for implements found in one of three shrines, Smith and Cornell Ph.D. candidate Jeffrey F. Leon report in their October 2014 American Journal of Archaeology article, “Divination and Sovereignty: The Late Bronze Age Shrines at Gegharot, Armenia.”

Excavations conducted at Gegharot since 2002 have turned up a variety of ceremonial, iconic and fortune-telling objects:

The Tsaghkahovit Plain was sparsely populated until around 1500 B.C. when a nameless people (they left no written record of what they called themselves) began to build strongholds and new institutions of rule there. “It was a time of radical inequality and centralized practices of economic redistribution,” Smith says, “and the political leaders were scrambling to hold on to their power. Knowing what the future held was critically important.” The diviner, Smith says, was a kind of primordial actuary, assessing risks and advising on pathways forward.

“We call them ‘shrines’ because of two distinctive qualities of the spaces: They were quite intimate in scale, with not much room for public spectacle,” Smith explains, “yet they appear to have been religiously charged places, designed and built to host esoteric rituals with consecrated objects – secretive rites focused on managing risks by diagnosing present conditions and prognosticating futures.”

The Bronze Age people who tried to predict futures there had a quarter-millennium run, until about 1150 B.C. Their divination paraphernalia, meticulously unearthed by the archaeologists, looks as if it had been abandoned in place, moments before the inhabitants fled some cataclysm.

Without Bronze Age mystics to interpret the bones and stones, it’s hard to know whether the citadel’s demise was presciently foreseen. As the fictional President Underwood said: “It’s not the beginning of the story I fear; it’s not knowing how it will end.”

Support for the study came, in part, from the National Science Foundation and other organizations. The study was conducted under the auspices of Project ArAGATS, the joint Armenian-American Project for the Archaeology and Geography of Ancient Transcaucasian Societies.