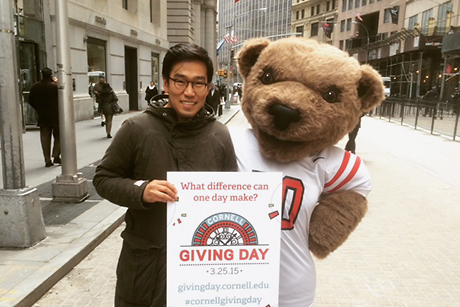 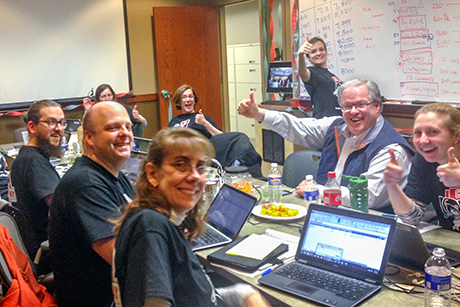 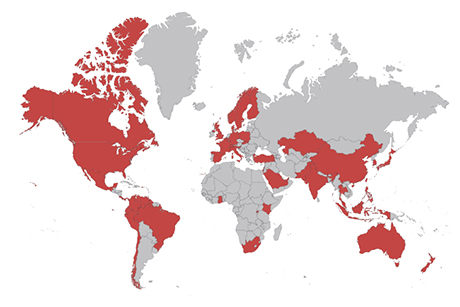 Provided
The university received charitable donations from more than 9,600 people - alumni, parents, staff, friends, students and faculty - totaling $6.97 million dollars. The gifts, mostly made online, came from people in every U.S. state, Puerto Rico, the U.S. Virgin Islands, and 52 countries on six continents (all but the stubbornly absent Antarctica).

“What a great first Cornell Giving Day,” Valisha Graves ’85 wrote in an email just hours after the day concluded. “I really enjoyed watching the leaderboard and challenges online, and I went to the reception at the Cornell Club.”

After making her gift, Graves did what Alumni Affairs and Development staff hoped donors would do: She promoted the campaign on Twitter, Facebook and Instagram, joining thousands who worked their networks and checked www.givingday.cornell.edu all day to bring in more gifts and unlock funds through several challenges.

Donors directed their gifts to any area of Cornell they wanted, with the main focus of the event focusing on colleges and units, which engaged in fierce but friendly competition to raise the most money and gifts. Athletics and Physical Education topped the list with $1,819,408 to support its programs, followed closely by the College of Arts and Sciences and the School of Hotel Administration.

Even areas near the bottom of leaderboards saw a tangible spike in support. For example, the Atkinson Center for a Sustainable Future brought in $7,295 in gifts from 50 people, more individual gifts than the center received all last year.

An additional $250,000 in challenge funds will be distributed among the colleges and units based on performance.

Gifts came in from 52 countries, six continents, and all 50 U.S. states plus Washington, D.C., and Puerto Rico, unlocking challenge funds tied to geographical location of donors.

In all, nine challenges were tied to activity of young alumni, Facebook posts, Instagram shares and others, adding $50,000 to the day's total.

A gift to the Cornell Law School from Stan Widger, J.D. ’75, was randomly selected to receive bonus money from all Reunion years gifts – classes ending in 0 and 5 – generating $8,000 for the Law School.

“It was a little like winning a lottery,” Widger said when he found out how his gift had multiplied, “except, of course, that I don’t get to keep the money – it goes to a much better cause.”

His guests included Professor Brian Earle ’67, MPS ’71, Lynah Rink Zamboni driver David Nulle (and a number of his signature costumes), Cornell Glee Club members and the Big Red Band. Two student leaders in the architecture program led viewers through a sneak preview of the dragon that will be unveiled on Dragon Day, March 27.

The last guest of the Giving Day live broadcast, Jenna Galbut ’13, told Hannon she is grateful for Cornell and promised to make a gift for each comment about gratitude posted during her interview.

“It’s amazing that we were able to generate so much excitement and participation in just one day,” he said.

The money raised, he said, is wonderful, but the best part of the day is that Cornell touched hundreds of thousands of people in the process, starting fruitful conversations about the value of a Cornell education, research and outreach.

Phlegar said many Cornellians he spoke with throughout the day were proud to give to Cornell and had fun with it.

“We saw the power of the Cornell community in action on March 25,” said Cornell President David Skorton. “Together, our alumni, parents and friends have shown how much they care about the university, and how much of an impact they can make together to further our mission on so many fronts. I’m truly impressed and grateful for this historic day of giving to Cornell.”