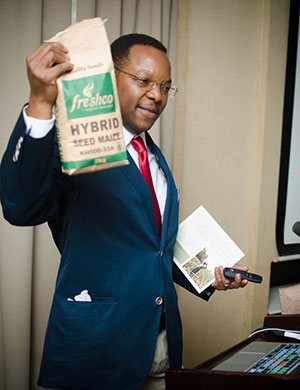 Provided
Ed Mabaya, principal investigator of TASAI and assistant director of CIIFAD, at the TASAI launch in Nairobi, Kenya, on March 12.

A new initiative offers hope for African small farms by helping ensure that new seed varieties with higher yields make it through the supply chain from breeders to farmers.

The African Seed Access Index (TASAI) was launched March 12 in Nairobi, Kenya, by its developers – the Cornell International Institute for Food, Agriculture and Development (CIIFAD) in collaboration with Market Matters, a nonprofit organization that assists small enterprises in sub-Saharan Africa.

CIIFAD and Market Matters staff developed TASAI to track indicators at key points along the seed delivery chain where failure impedes the flow of seeds to small-farm owners. The findings may then inform governments, industries, breeders, farmers and others on where to focus attention to keep supplies moving. African farmers’ adoption rate of improved staple varieties, such as maize, cowpea and sorghum, can be as low as 20 percent.

“I am a product of smallholder agriculture in Zimbabwe,” said Ed Mabaya, principal investigator of TASAI and assistant director of CIIFAD. Mabaya, one of 10 children in his family, grew up on farm with less than 2 hectares (5 acres) of land. Like many others, his family’s path out of poverty was dependent on having access to improved seed varieties coming into the market, he said. “It’s the only option for millions of small farmers,” who account for up to 70 percent of African workers, he added.

The launch event included results from a successful pilot program conducted in Kenya, Uganda, South Africa and Zimbabwe. Based on enthusiastic interest from stakeholders, TASAI developers hope to expand to more than 20 African countries in phase two of the project, Mabaya said.

With breeders, governments, industry, NGOs, farmers and others involved in a complex supply chain, there has been no viable system – until now – for getting a top-down view of where choke points stifle seed access.

TASAI tracks 16 indicators across five categories that assess the vibrancy and competitiveness of national seed sectors by measuring such things as research and development, industry competitiveness, service to smallholder farmers, seed policy and regulations, and institutional support. For each indicator, the index evaluated whether that link is having a positive or negative impact on seed access by farmers, thereby exposing weaknesses in the supply chain.

For example, the pilot program revealed that Kenya lacks a robust and competitive seed industry, as government-controlled seed companies dominate and discourage new startups. In South Africa, on the other hand, while the government no longer runs seed businesses, the country scored poorly at making seeds available to small farmers.

“The system is only as strong as its weakest link,” Mabaya said.

Accountability also is addressed by the index, since at “almost every node there is a responsible person to develop remedies” for failings at that point, said Mabaya.

Cornell’s role is key to the process as it provides a credible and neutral broker of information, without competing interests, Mabaya said. “We wanted to develop a simple diagnostic tool,” he said. Now, TASAI staff can inform the stakeholders in the delivery system, he added.