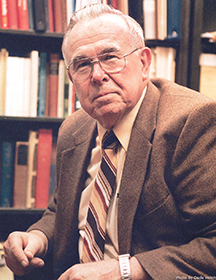 Francis H. Fox, DVM ’45, professor emeritus of large animal medicine in the College of Veterinary Medicine, died March 13 in Ithaca at the age of 92. A widely respected professor at Cornell University from 1947 to 1992, he continued to be a prominent figure for many years after his retirement.

“The entire Cornell veterinary community sends our condolences to the Fox family,” said Michael I. Kotlikoff, the Austin O. Hooey Dean of Veterinary Medicine. “Francis was an iconic Cornell veterinarian, a leader in the profession and a teacher who touched the lives of countless faculty, students, staff and clients. His medical expertise, diagnostic skills and understanding of animals helped generations of local farmers maintain healthy, productive livestock. He passed those qualities on to Cornell veterinary students, to the benefit of farm animals well beyond our region.”

Fox also was known for his sense of humor.

“Francis shared with his students a fondness for jokes, and the battle of wits that ensued provided a lively chapter in the history of our college,” said Kotlikoff. “Dr. Fox will be greatly missed.”

Fox is survived by his wife of 68 years, Mildred, four children and seven grandchildren.

Calling hours will be Monday, March 16, from 4 to 7 p.m. at Bangs Funeral Home, 209 W. Green Street, Ithaca. A funeral Mass will be held Tuesday, March 17, at 11 a.m. at St. Catherine of Siena Church, 302 St. Catherine Circle, Ithaca. In lieu of flowers, memorial contributions can be made to St. Catherine of Siena Church or to the Dr. Francis H. Fox Scholarship Fund, College of Veterinary Medicine, Box 39, Cornell University, Ithaca, NY 14853-6401, a fund that supports second- or third-year students who have financial need, an interest in large animal medicine and an aptitude for physical diagnostics.