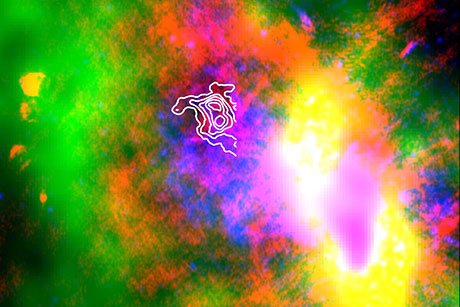 NASA/Cornell
Peering into the center of the Milky Way galaxy, in this false color image, contour lines reveal the dusty area of Sagittarius A East - an ancient supernova remnant. 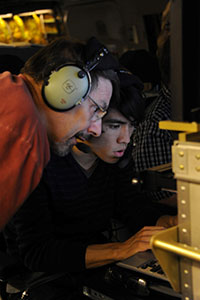 Sifting through the center of the Milky Way galaxy, astronomers have made the first direct observations – using an infrared telescope aboard a modified Boeing 747 – of cosmic building-block dust resulting from an ancient supernova.

“Dust itself is very important because it’s the stuff that forms stars and planets, like the sun and Earth, respectively, so to know where it comes from is an important question,” said lead author Ryan Lau, Cornell postdoctoral associate for astronomy, in research published March 19 in Science Express. “Our work strongly reinforces the theory that supernovae are producing the dust seen in galaxies of the early universe,” he said.

Lau explains that one of astronomy’s big questions is why galaxies – forming as recently as 1 billion years after the Big Bang – contain so much dust. The leading theory is that supernovae – stars that explode at the end of their lives – contain large amounts of metal-enriched material that, in turn, harbors key ingredients of dust, like silicon, iron and carbon.

The astronomers captured the observations via FORCAST (the Faint Object Infrared Camera Telescope) aboard SOFIA (the Stratospheric Observatory for Infrared Astronomy), a modified Boeing 747 and a joint project of NASA, the German Aerospace Center and the Universities Space Research Association. It is the world’s largest airborne astronomical observatory. Currently, no space-based telescope can observe at far-infrared wavelengths, and ground-based telescopes are unable to observe light at these wavelengths due to the Earth’s atmosphere.