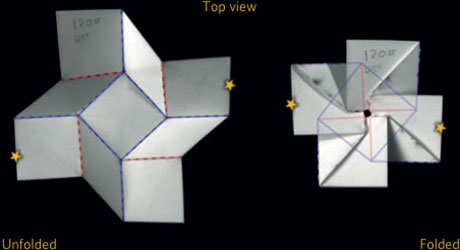 An origami paper-folding pattern called the square twist is the basis of a microscopic switch that Cornell physicists say could lead to origami-inspired materials and machines.

Their demonstration of a square twist mechanical switch, the size of a speck of dust, is detailed in Nature Materials, March 9. First author Jesse Silverberg, Ph.D. '14, is a former graduate student in the lab of senior author Itai Cohen, associate professor of physics in the College of Arts and Sciences. As with a previous paper on origami mechanics, the team of theorists, physicists, materials scientists and engineers hails from Cornell; University of Massachusetts, Amherst; and Western New England University.

For this paper, instead of exploring the global mechanics of a tessellating pattern, they focused on individual unit cells, Silverberg said. The team used experimental and computer models to develop a generic design principle for turning a square twist, which consists of squares and parallelograms, into a mechanical switch. They demonstrated their design principle by folding a gel polymer developed by Ryan Hayward and Junhee Na of the University of Massachusetts. The nice thing about geometry-based design is that it works at any scale and with any material, the researchers noted.

The researchers found that the square twist produces a distinct snapping between folded and unfolded states, like a light switch. The found they could tune the strength of this toggle action by changing the angles between the creases.

Their analysis takes into account the properties of many materials, paper included, that allow for flexibility. Mathematical modeling of origami often assumes that the facets are rigid. According to this type of modeling, the square twist switch wouldn’t have been foldable.

“We’re starting to explore this idea of going beyond rigid facets,” Cohen said. “We’re learning how to incorporate higher-order effects in order to achieve origami-based machines.”

Silverberg calls this demonstration another tool in the toolbox of building blocks for origami machines. The vision is to combine these simple design principles with computer-controlled actuators for more complex devices, like microscopic robotic grippers, stents in arteries that respond better to different forces, or even transformer-like robots that fold and unfold.

“There’s this decades-long history of art we can tap into as inspiration,” Silverberg said.

The paper is titled “Origami Structures with a Critical Transition to Bistability Arising From Hidden Degrees of Freedom.” The work was supported by the National Science Foundation.

Origami could lead to tunable materials