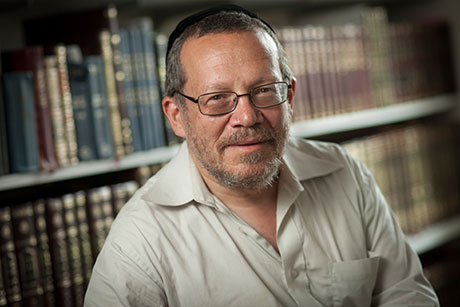 Provided
Jonathan Boyarin, the Thomas and Diann Mann Professor of Jewish Studies and professor of anthropology, translated Menashe Unger's "A Fire Burns in Kotsk" from its original Yiddish.

Menashe Unger started life as a good 19th-century Polish Hasidic Jew, the youngest son of a revered rabbi, and received rabbinic ordination at the age of 17 – then he turned his back on the religious world to attend university and join the Labor Zionist movement. He worked as a stone mason and journalist, and eventually emigrated to America, where he spent the remainder of his life writing about East European Jews, their histories, folk tales and wisdom.

One of those histories, “A Fire Burns in Kotsk,” has just been translated from Yiddish for the first time by Jonathan Boyarin, the Thomas and Diann Mann Professor of Jewish Studies and professor of anthropology in the College of Arts and Sciences. The historical narrative, which weaves together tales told in Unger’s family with an account of one of the most controversial Hasidic dynasties in Poland, originally was published in Buenos Aires in 1949.

In his translator’s preface, Boyarin describes the book’s subject as “the tension between [the] struggle for pure concentration on the search for Truth and hence the divine, and the reality of mortal beings entangled in webs of family, community and the press of secular history.”

A half century after the Hasidic movement spread across Eastern Europe, some felt that Hasidism had moved away from its revolutionary early promise. Writing a century after the events in his book, Unger portrayed the Kotsker’s legacy as a way to make those Hasidic struggles pertinent for readers in his own time.

Unger writes about the darker side of Hasidic life and the struggle to remain pious. As the Kotsker Rebbe, Unger’s central protagonist, says, “If a person goes around proudly feeling that he’s already there, he’s certainly lost.”

This is Boyarin’s first translation of a literary, rather than an historical or academic, work. Because the original was so well written and he was already so familiar with the milieu in which it was set, he says the translation process moved fairly quickly. “As often happens, the last 3 percent was the hardest part, when I had to figure out, for example, whether a certain Yiddish word means ‘vermouth’ or ‘wormwood liquor,’ and whether those are the same thing or not.”

Boyarin says he enjoys doing translations, partly because he loves the Yiddish language, “and partly because it’s a very powerful form of teaching – if we think of translation as the transmission of knowledge and wisdom. My passion for translation also has to do with the way it helps me think about the things I want to say in my own voice, things that have never been said before in any language.”

Boyarin’s research focuses on Jewish communities and on the dynamics of Jewish culture, memory and identity. He has investigated these fields in a range of ethnographic projects set in Paris, Jerusalem and the Lower East Side of New York City. His other books include “Jewish Families,” “Mornings at the Stanton Street Shul: A Lower East Side Summer” and “The Unconverted Self: Jews, Indians, and the Identity of Christian Europe.”