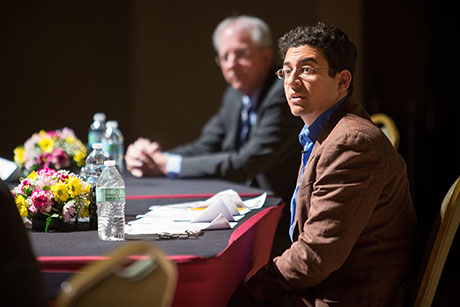 One of the few consensus points reached between scholar Bassam Haddad and former ambassador Dennis Ross in the 2015 Lund Critical Debate was that America’s foreign policy responses to the Arab Spring have been far from successful.

The pair presented competing perspectives on the merits, intentions and influence of the America’s foreign policy strategy in the Middle East over the course of the Bush and Obama administrations on March 3 in Statler Auditorium.

Beginning with an assessment of the Bush administration, Ross quoted former Secretary of State Condoleezza Rice from a 2005 speech, “For the last 60 years the U.S. put stability over democracy and produced neither.” Ross asserted that this statement reflected an important rationale behind the Bush administration’s foreign policy strategy for dealing with al-Qaida and the “war on terror.”

“Their rationale was, if we promote democracy, that’s the best way to compete and win in this struggle,” said Ross, the William Davidson Distinguished Fellow at The Washington Institute for Near East Policy.

During the early years of the Obama administration, Ross continued, the president and his supporters consistently sought to disassociate their foreign policy approach from the previous administration.

“There was a view that democracy promotion had become a dirty concept because it was conflated with the Bush administration’s approach to imposing change in the Middle East and especially in Iraq,” Ross said. The Arab Spring caused a shift in the Obama administration’s foreign policy strategy regarding the active promotion of democracy abroad while trying not to impose American values on the region. In the ambassador’s view, blame for what has happened in countries like Syria and Egypt does not fall squarely on America’s shoulders.

“I think we could be more effective, but there needs to be humility, and we need to recognize that this isn’t a region that we’re going to be able to shape,” the ambassador argued. “If we really want to see change in the region that reflects values that we would like to see take hold, there’s going to have to be a sense within the region of responsibility.”

Haddad, director of the Middle East Studies Program at George Mason University, made it clear that he felt “U.S. policy has been a failure.” He said the “fraudulent invasion of Iraq” and direct military intervention in the Middle East generally set in motion social, political and military forces that have torn apart sections of the region for years and likely will continue to do so for decades to come.

“At every step of the way, we find ourselves complaining about, or fighting against, the consequences of our previous policy failures,” he said.

Haddad outlined three caveats he believed are important to understanding what shapes U.S. policy in the Middle East: the extraordinary power of the U.S. in its relationship with most of the world, the widespread readiness in the Western world to believe nearly anything about the Middle East, and America’s presumed sense of superiority to the region and its peoples.

He then offered a brief, country-by-country analysis of U.S. foreign policy responses to the Arab Spring in Tunisia, Egypt, Libya, Yemen, Bahrain and Syria. For each country, he gave a grade to symbolize his evaluation of the U.S. policy decisions and their overall effectiveness: The highest grade given was a D-.

In closing statements, Haddad maintained that it is important for us to reconsider who benefits from our foreign policy and that we need to reduce our military footprint on the world, while Ross cautioned “When there are direct threats and there are those who use force if the United States isn’t prepared to use force against them, we are going to pay a terrible price.”

The Lund Debate, moderated by Aziz Rana, associate professor at Cornell Law School, was sponsored by the Mario Einaudi Center for International Studies.

Robert Johnson ’17 is a student intern at the Cornell Chronicle.