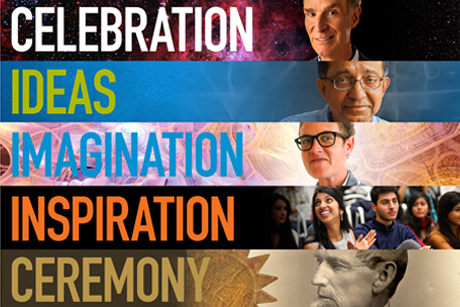 More than 4,400 people have registered for Charter Day Weekend: A Festival of Ideas and Imagination, April 24-27, and all members of the Cornell and local communities are invited to attend the once-in-a-lifetime event.

Filled with more than 40 events celebrating the global contributions of Cornell alumni, faculty, staff and students, weekend activities include everything from athletic events and special exhibits to a fringe festival on Ho Plaza and the unveiling of the sesquicentennial ice cream, Sweet Cornell.

The weekend kicks off Friday at 6 p.m. with “Cornell and the Joy of Discovery: Any Person, Any Planet,” with Bill Nye ’77 and Steve Squyres ’78, Ph.D. ’81, presenting Cornell’s history of leadership in space exploration. Although sold out on campus, the talk can be watched via live stream or at Cinemapolis. Tickets for the Cinemapolis showing are available for pickup (up to four per person) on campus at Cornell’s office of Community Relations, 110 Day Hall. Doors open at 7 p.m. for the Big Red Birthday Bash, which will celebrate Cornell’s 150th birthday with performances, exhibitions and cupcakes. A free shuttle bus will be running between Barton Hall and downtown Ithaca throughout the evening.

It’s not too late to register

Online registration ends at 6 p.m. April 22. On-site registration will be available throughout the weekend, beginning Friday at 4:30 p.m. at King-Shaw Hall. See the complete schedule of events.

All registration fees for Saturday and Sunday are donated to the employee and student care funds, and the Tompkins County Public Library.

Saturday at 11 a.m. Saturday in Statler Auditorium, four distinguished scholars will look at the fundamental changes have occurred in teaching and research in the humanities and the arts over the last several decades in the panel “Revolution in the Humanities in the Last 50 Years.” At 1 p.m., panelists will consider how some convicted defendants are innocent despite being convicted and serving lengthy prison terms or even death row, in “Convicted By Law: Acquitted by Social Science” (Call Auditorium and live streamed).

Cornell professors and nonprofit executives come together to discuss how poverty can be eradicated in the panel “Cornell and Global Poverty Reduction: Philanthropy, Policy and Scholarship” at 3 p.m. in Statler Auditorium. At 5 p.m., take in strikingly beautiful images used to elucidate processes occurring on atomic to astronomical scales in “Illuminating Images: A First Step to Scientific Discovery” in Barton Hall.

On Sunday at 9 a.m., alumni and faculty will talk about “Strengthening the Global Financial System,” the stability of the global financial system and the emergence of new economic powers in Bailey Hall. How is it possible that with so many people in the world there is a six-step chain between you and everyone else? Find out at 1 p.m. in the panel “Six Degrees of Separation” with representatives from Facebook and Microsoft and top Cornell professors.

The festivities conclude Monday at 10 a.m. in Barton Hall with the Charter Day ceremony and video premiere in Barton Hall. The event will be live streamed.