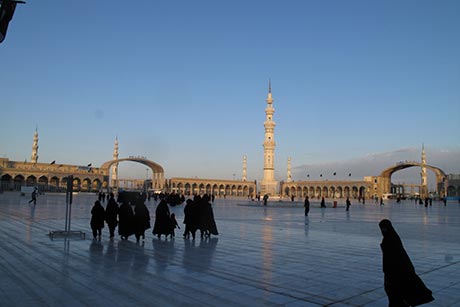 This March, I had the unique opportunity for an insider’s view as I was invited to participate in a short course in the city of Qom on Shi’a Islam, the majority Muslim denomination in Iran. Over a period of five days, we attended lectures on Islamic ethics, jurisprudence, justice, the concepts of monotheism and prophecy, theory and practice of Shi’a government, rituals and more. Our group was diverse, comprising graduate students, professors and diplomats from across Europe, Asia and North America.

I have been researching Islamic history for about 15 years, and for the past five years my focus has been on Shi’a Muslim communities in Southeast Asia (Indonesia, Malaysia, Singapore, Thailand, etc.). Many of my research informants have studied, lived or worked in Iran.

Qom is just a couple of hours south of the capital city, Tehran, but it appears to be a world apart. A comparatively small town (only 1 million inhabitants), Qom is the center of Shi’a religious learning. Students come from the world over to study with the most influential scholars of our time (mujtahid). Women walk around in their black chadars and men don their turbans and sober mantels as they whoosh from mosque to shrine to school on their motorbikes. People of all nations walk through the maze of the bazaar, united in their common theological interests.

To garner a broader perspective on Iran, after five days spent studying in Qom we moved on to Isfahan and Tehran. Isfahan was the capital of the Safavid Empire throughout the 17th century, and its architecture is a breathtaking testament to its past role.

One hundred miles north of Qom, in Tehran, the headscarf becomes a hair accessory, and baggy clothes – also representative of “modesty” – turn into tight pants and fashionable coats. Tehran’s status is marked by its dense urbanization, super-efficient underground metro and endless traffic jams – a different kind of cosmopolitanism from that I saw in Qom.

Our host, the University of Religions and Denominations, arranged for visits at the Armenian Patriarchate, the Vank Cathedral, the Jewish synagogue, the Zoroastrian temple and the Vatican’s Catholic church. The status of religious minorities is a complicated matter in Iran – as it is everywhere else where the state espouses a specific religion (Myanmar, India, Malaysia, Sri Lanka, Japan, just to mention a few). In Iran, the status is that of “ethnic” religions, with set limits to any expansion of their congregations (proselytism). Yet from what I saw the state seems to take good care of all places of worship, sponsors ethnic-based schools (the Armenian school teaches Armenian language, history and religion, and the same goes for the Jewish schools), and apparently follows the Islamic juridical principle of dhimma, the covenant of protection accorded to non-Muslims.

There is more to Iran than this. Qom is not frozen in time: One of our mujtahid professors is vegetarian because he feels the contemporary meat industry does not fully reflect the idea of halal (“permissible” in Islamic jurisprudence), which has nowadays been reduced to the slaughtering technique without much thought given to the life experience of the animal. And as in Tehran we reflected on the obligation of covering our heads (foreign non-Muslim women included). The daughter of a mujtahid, whose headscarf continuously slides off her head, argued that the key point is to not let the law take the spirit of religious obligations away.

Chiara Formichi is assistant professor in the Department of Asian Studies. In fall 2015 she will teach the Islam in Asia (ASIAN/RELST 2247) and the seminar Shi’i Islam in Southeast Asia (ASIAN 4434/6634). She has received an Einaudi Center for International Studies small grant to organize a workshop on religious minorities in Asia.