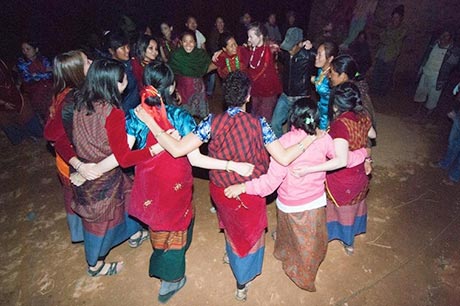 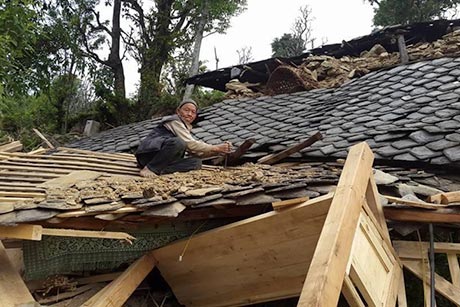 My heart is heavier than the Heart Sutra, which is usually translated as: “Form is emptiness. Emptiness is form. Gone. Gone. Gone beyond. Gone altogether beyond.”

Mhanegang, Nepal, where David Holmberg, Ph.D. ’80, professor of anthropology, and I have worked for 40-plus years, is gone.

According to our longtime friend, host and research partner, Suryaman Tamang, all the houses in Mhanegang have been destroyed. They already have lost 17 people in this one small community. Up the mountain, in Balche, Jay Tamang reports that 30 people were killed by a single landslide. And at the head of the valley, according to Sarita Lopchen Himdung, the large, dense community of Bomtang was flattened. Cremation pyres have been burning almost nonstop throughout the entire Salankhu Khola valley, where these villages are located, in the very severely hit Nuwakot District.

I can almost hear the keening of mourners all the way here in Ithaca.

It is incredible to me that we were just in Mhanegang a few weeks ago. The Cornell Nepal Study Program (CNSP) students and faculty were with us there a few weeks before that. We sang and danced well into the night: The CNSP students showed everyone the macarena and square dancing; the Mhanegang villagers taught the CNSP students Tamang line and circle dancing. There were newborn goats and fried doughnuts. The students bathed at the spring in the sun.

Mhanegang, like all of Nepal, was, of course, very lucky that the first earthquake occurred at noon, when few people were asleep or in their houses, and on a Saturday, when no one was at school. Most people were relaxing or working outside with family and friends. They are not lucky now. Everything they had is buried under the rubble of their houses. They are not on anyone’s relief radar. And the quaking continues.

The Cornell community is pitching in to help provide relief to residents of Nepal. To donate to the relief effort online, visit the Cornell for Nepal website. Cornell for Nepal will have tables with donation boxes on Ho Plaza until the end of the semester, today through May 1, and May 4-6, from 9 a.m. to 2 p.m. and 5 to 6 p.m. Donation boxes also are located in Trillium, the Terrace Restaurant and Mac’s Café, and in house offices at North Campus residence halls and Hans Bethe House on West Campus.

The initial quake was centered a bit to the west of Mhanegang near Barpak, but according to geologists, the shallow nature of this quake meant that its greatest devastation rippled out to the east – right toward Mhanegang. And, of course, hundreds of other villages. Estimates are that 90 percent of the houses in Rasuwa district were destroyed. U.S. Fulbright Scholar Austin Lord gives a vivid account of how terrifying it was to be in Langtang during the earthquake. Yale anthropologist Sara Shneiderman, Ph.D. ’09, and anthropologist Mark Turin report extensive damage in Dolakha. Roshan Phyuba Tamang visited his home village of Darkka in Dhading and posted photos of the damage, which are still among the only pictures available from the region between the epicenter and Kathmandu.

Unfortunately this earthquake isn’t done yet either. The U.S. Geological Survey reports a total of 40 separate quakes/aftershocks, including three “significant” ones: the original 7.8 quake, followed by a 6.6 roughly 3 hours later a little further east, and the next day by a 6.7 one at Kodari, following the pattern of movement observed by the geologists – from the original epicenter east and a little north.

And it’s not just the ongoing repeatedly quaking earth that is shocking – although it must make everything seem very terrifyingly impermanent indeed. The people in Mhanegang and the other villages most directly in the path of this earthwreck are going to become very desperate very soon. They need medical attention, blankets, tents and food. Their water systems and sanitation need to be fixed. They will need almost unimaginable amounts of help rebuilding their homes. And lives. And hearts. As a village friend of Shneiderman said, “My heart can’t stop shaking.”

Kathryn S. March, Ph.D. ’79, is a professor in the Departments of Anthropology and Feminist, Gender and Sexuality Studies. She has worked on questions of anthropology, gender and social change in Himalayan Asia since 1973.