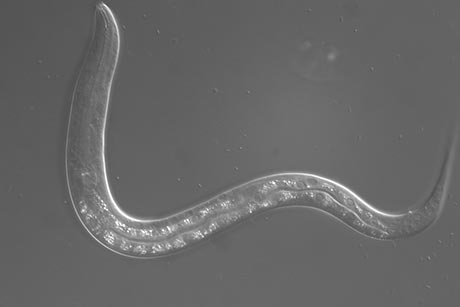 Caenorhabditis elegans, a nematode, is extensively used as a model organism for research.

Research on a modified protein around which DNA is wrapped sheds light on how gene regulation is linked to aging and longevity in nematodes, fruit flies and possibly humans.

The research has implications for how gene expression is regulated, and could offer a new drug target for age-related diseases.

The Cornell study, published April 1 in the journal Genes and Development, focuses on a specific modification of the histone protein H3. Histone proteins, which are like spools in which DNA is the thread, are essential for packaging DNA in cells. Histones can be modified in many ways, which affects how the DNA is packaged, and how genes are turned on and off. The H3 modification, named H3K36me3, refers to a chemical mark placed at a specific position on the H3 protein.

Sylvia Lee, associate professor of molecular biology and genetics in the College of Arts and Sciences, is the paper’s senior author, and Mintie Pu, a postdoctoral researcher in Lee’s lab, is first author.

“If this histone protein mark is found at a high level, it can stabilize gene expression through the aging process,” said Lee.

The researchers questioned whether this pattern was unique to C. elegans or could be observed generally in other species. Working with collaborators at Brown University, the team examined data from fruit flies (Drosophila melanogaster) and found the same correlation.

“We have good reason to think what we are seeing is very likely to be conserved in humans,” Lee said.

The researchers then deleted an enzyme in C. elegans that normally facilitates the chemical mark on H3 proteins, so that the modification was no longer present. Without it, gene expression became more variable with age and those nematodes had shorter lifespans, Lee said.

“We speculate that this histone protein mark is important for preserving normal longevity,” she said.

The next step will be to test whether the findings in nematodes and fruit flies hold true for mammals and humans. Even though the H3 modification is found in many different cells, including human cells, not much is known about its functions. Future study could add to fundamental understanding of gene regulation, Lee said.

Clinically speaking, the H3K36me3 modification has links to developmental defects and cancer development. “A protein partner that recognizes this histone modification and mediates disease outcomes could be a target point” for future therapies, Lee said.

The study was funded by the National Institute of Aging and the Ellison Medical Foundation .