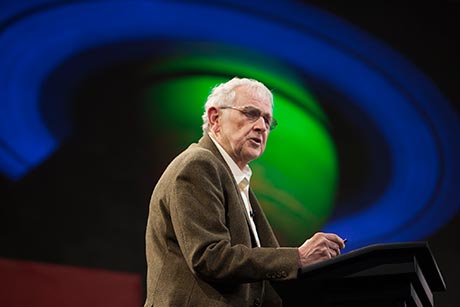 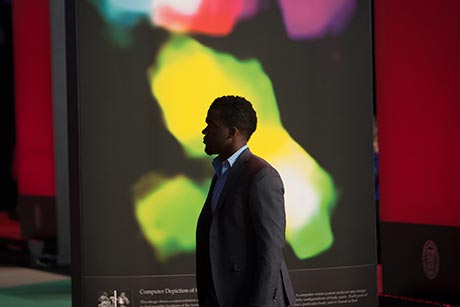 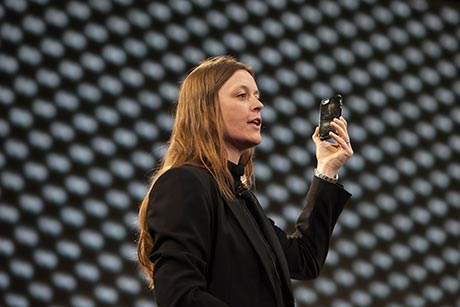 Jason Koski/University Photography
Lena Kourkoutis, a Rebecca Q. and James C. Morgan Sesquicentennial Faculty Fellow in the College of Engineering and assistant professor of applied and engineering physics, takes her turn in front of the large screens at Barton Hall.

Put a neurobiologist, a planetary astronomer, a marine biologist, a microscope-wielding physicist, and another physicist with a Nobel Prize in chemistry together in one big room – with an awe-struck audience of hundreds – and by dusk on April 25, many pictures will be shown. Tales of science will be told. And the future will be predicted by those in the know.

That was the idea behind the Cornell sesquicentennial event “Illuminating Images: A First Step to Scientific Discovery,” with giant video screens overhead in Barton Hall and scientists with clickers.

Showing off his very best, eye-popping photos, Joseph Burns, Ph.D. ’66, the Irving Porter Church Professor of Engineering, professor of astronomy and dean of the university faculty, had the audience straining to see themselves in one picture. Saturn’s rings were brightly lit, but the planet itself was a dark blotch, Burns explained, because spacecraft cameras were in its planetary shadow. In the distance was another planet. “That’s Earth,” Burns said. “There is a 50 percent chance you’re in that picture.”

Drew Harvell, professor of ecology and evolutionary biology, played a clip from an upcoming documentary (narrated by actor and environmental activist Ted Danson, who was recently on campus as the Iscol Lecturer), telling the story of artistic depictions that help scientists.

She compared side-by-side pictures of two nudibranch sea slugs – one from the Cornell Collection of Blaschka Invertebrate Models, and an equally beautiful sea slug she had photographed under water. Although she has studied living sea creatures for years in their natural habitat, Harvell said she gains further insight by re-examining the exquisitely detailed glass figurines.

Microscopist Lena Kourkoutis, a Rebecca Q. and James C. Morgan Sesquicentennial Faculty Fellow in the College of Engineering and assistant professor of applied and engineering physics, said her 5-year-old son often prefers the vivid imagery of PBS science programs to kid-stuff TV. Young Quinn was in the audience Saturday evening, gazing up at his mother’s way-way-way-larger-than-life pictures, perhaps dreaming of the day he attends Cornell, learns to operate million-dollar microscopes and wows the public with pictures of his own.

Later on, Nobel laureate Eric Betzig said, “Just as you cannot build a car that can take the kids to day care on Friday and win the Indianapolis 500 on Sunday, you can’t make a single microscope that does everything.”

Betzig M.S. ’85, Ph.D. ’88, who shared the 2014 Nobel Prize in chemistry with William Moerner, M.S. ’78, Ph.D. ’82, for their achievements in optical microscopy, continued, “So we need to combine two-photon microscopy … with adaptive optics … with genetic tools and chemical tools and tie all of that together – and that’s the way we’re finally going to understand the brain.”

The audience could be forgiven for thinking they’d landed in some Big Red Stonehenge, surrounded as they were by a mysterious circle of towering monoliths.

Those red monoliths turned out to be light boxes, each featuring a giant scientific image like moderator Ronald Hoy’s microscope picture of a mosquito ear. Before heading over to Bailey Hall for the “My Cornell” concert, the Barton crowd strolled through the light boxes and talked to the artistic scientists.

At a Wednesday afternoon dress rehearsal, Kourkoutis previewed the electron-microscope images she would display and commented on the power of the visual sense: “Even the most scientific mind needs more than raw data and equations to bring systems of interest to life,” she said. “A really good picture can get the viewer excited and curious about the science behind it.”