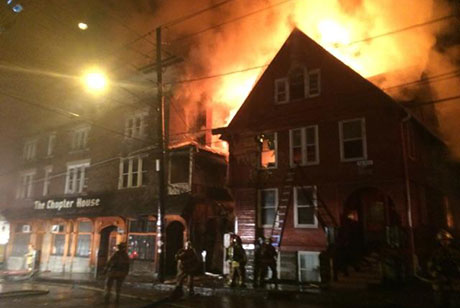 Provided
Firefighters battle a blaze early Tuesday on the 400 block of Stewart Avenue.

Firefighters from the Ithaca Fire Department and neighboring agencies extinguished a multi-building fire that broke out early this morning on the 400 block of Stewart Avenue in Ithaca.

The fire displaced 44 Cornell students and two staff members. No injuries were reported in connection with the incident.

According to an Ithaca Fire Department press release, a reported fire at the Chapter House came into the 911 center at 4:30 a.m. When crews arrived at the scene, the Chapter House at 400 Stewart Ave. and a four-story apartment building at 406 Stewart were ablaze.

Donations accepted
For those who wish to make monetary donations to help victims of the April 14 Stewart Avenue fire, three different ways have been established.

• Make a contribution at the “Go Fund Me” website.

Donors who wish to receive class and tax credit from Cornell University for a donation, must send funds through the university’s Alumni Affairs & Development by either of two payment methods:

• By credit card – Go to Cornell’s secure payment website. For the designation, choose “Student and Academic Services" from the first pull-down menu, and then choose "Other" from the second pull down menu. Then enter "Mortar Board Stewart Ave. Fire Fund, Fund #0011876" in the Other Designation or Special Instructions box.

Firefighters were able to search the entire Chapter House building and most of the apartment building, when Assistant Fire Chief Mike Schnurle ordered crews out of the buildings due to the heavy fire and structural instability.

One resident of the apartment building was unaccounted for, and Ithaca Fire and Police officials, along with Cornell Police, worked to track down the individual to ensure he was not in the building at the time of the fire.

The New York State Office of Fire Prevention and Control is working with the Ithaca Fire Department Fire Investigation Unit and the Ithaca Police Department to determine the cause of the fire. Both buildings appear to be total losses, according to the press release.

The Statler Hotel provided breakfast and Cornell Dining is providing Big Red Bucks to the students. The Cornell Store has distributed clothing to each student, and the Ithaca Red Cross is supplying blankets and vouchers for other supplies. A local landlord is providing the students with furnished apartments for the rest of the semester.

Currently, the Ithaca Police Department is asking pedestrians to avoid the area for safety reasons. Traffic on Stewart Avenue is closed from Buffalo Street to Campus Road until approximately 4 p.m. today. Also, Williams Street and Osmund Place are closed. Traffic on South Avenue, West Avenue and Edgemoor Lane are accessible at the discretion of fire officials.