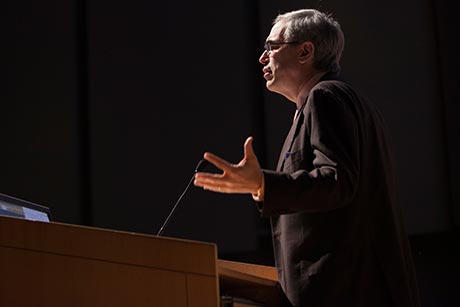 Jay Walker ’77 has founded 40 to 50 companies, and while most of them failed, he had several big hits along the way, namely priceline.com, Synapse and Walker Digital. He also is an owner of TEDMED, an annual healthcare innovation summit.

He told a crowd of nearly 300 at the eLab Demo Day April 16 that he feels pretty comfortable giving advice to future entrepreneurs, and did just that as keynote speaker for the event, part of Entrepreneurship at Cornell’s Celebration two-day conference and a showcase for 10 student companies working at the student business accelerator.

“Entrepreneurship is an affliction that used to be looked down upon,” Walker said. “But now, for most people in the industrial world, entrepreneurs are actually pretty cool. People ask us about our businesses. We’re no longer the weird ones.”

Walker delved into what he called 10 “superforces” that will shape the future – forces he said entrepreneurs would be wise to include in their business planning.

Among them: New sensor technologies; a software revolution focused on artificial intelligence, machine learning and big data; the importance of feedback, both biological and from customers; a new industrial revolution around 3-D printing; robotics; and ultra-urbanization.

“We’ll be changing the software of every living thing,” Walker said. “Scientists are creating proteins, bacteria and enzymes, living things that are the engines of everything.”

Walker sees a future where agriculture is reimagined, relying on the creation of food in laboratories rather than fields and an office where the factory exists on your desktop and robots do everything from surgery to journalism.