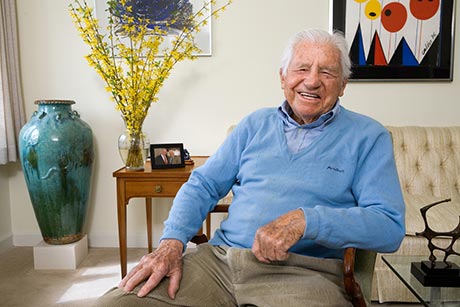 M.H. “Mike” Abrams, the influential literary critic and beloved Cornell English professor who edited the renowned reference “The Norton Anthology of English Literature” for four decades, died April 21 at Kendal of Ithaca. He was 102.

Abrams, who received the National Humanities Medal from President Barack Obama last July, was the Class of 1916 Professor Emeritus of English. He came to Cornell in 1945 as an assistant professor and retired in 1983. Among his students over the years were literary critics Harold Bloom ’51 and E.D. Hirsch ’50 and novelist Thomas Pynchon ’59. Abrams was named the F.J. Whiton Professor of English in 1960 and the Class of 1916 Professor in 1973.

“One of the dominant figures in literary criticism of the 20th century, M.H. (Mike) Abrams was also the quintessential Cornellian,” President David Skorton said. “He was an inspiring teacher, an extraordinary colleague, chair of the Cornell University Centennial Commission of 1965, and he never missed a home football game. His good judgment, his perennial optimism, his deep wisdom, his sense of humor and his fundamental decency will be sorely missed.”

At Cornell, Abrams helped found the A.D. White Center for the Humanities, now the Society for the Humanities. A longtime Cornell University Library supporter, he chaired membership drives and established an endowment that enabled the library to acquire a set of William Wordsworth’s 1827 “Poetical Works” and other holdings.

“Mike Abrams was a formidable figure in the humanities who changed our understanding of 19th-century literature and thought. But he was also a calm, modest and wholly unpretentious man,” said Jonathan Culler, the Class of 1916 Professor of English and Comparative Literature. 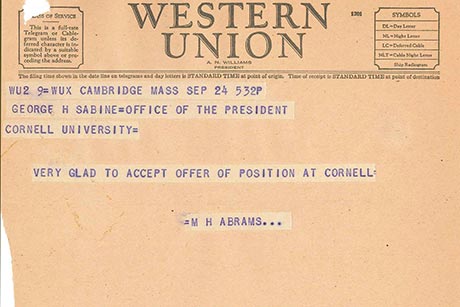 Mike Abrams sent this Western-Union telegram to accept the offer of a job from Cornell in 1945.

Abrams’ passion and dedication to literary scholarship was highly regarded by students and scholars the world over.

“We are human, and nothing is more interesting to us than humanity,” Abrams said in 1999. “The appeal of literature is that it is so thoroughly a human thing – by, for and about human beings. If you lose that focus, you obviate the source of the power and permanence of literature.”

Abrams’ contributions to the study of literature – on campus and around the world – were many. He conceived “The Norton Anthology of English Literature,” an enduring reference for high school and college English students, and was its general editor through seven editions from 1962 to 2000. The New York Times noted that Abrams “refined the art of stuffing 13 centuries of literature into 6,000-odd pages of wispy cigarette paper.”

He wrote or edited more than a dozen award-winning and widely read books, including his 1953 history of criticism, “The Mirror and the Lamp: Romantic Theory and the Critical Tradition” – ranked No. 25 on the Modern Library’s list of the 100 best nonfiction books written in English in the 20th century.

His other works included “Natural Supernaturalism: Tradition and Revolution in Romantic Literature” (1971) and “The Glossary of Literary Terms,” first published in 1957; he remained its lead author and editor through several editions, and is co-editor of the 11th edition, published this year.

Abrams was elected to the American Academy of Arts and Sciences (AAAS), the American Philosophical Society and the British Academy. His honors included the Award in Humanistic Studies from AAAS and the Keats-Shelley Society’s Distinguished Scholar Award.

“Mike Abrams vividly exemplified how a life of engagement with literature, the arts and the humanities can keep the mind vigorously alive,” said Roger Gilbert, professor and chair of English. “Since coming to Cornell I’ve taken every opportunity I could to bring Mike to my classes, which he was always happy to do. His teaching inspired generations of students.”

The Department of English honored Abrams’ 100th birthday in July 2012 with a tribute by friends and colleagues; he also gave a lecture on “The Fourth Dimension of a Poem.”

Throughout his 80s and 90s, Abrams continued to lecture at Cornell, Yale and other institutions, and remained a visible and active participant in campus life – giving the keynote at a 2005 James Joyce conference, public talks on reading poetry in 2008 and 2010, and attending English department events and Big Red football games. He never missed a home game since coming to Ithaca in 1945, saying he liked “the snappy fall air and the excitement of the game, and the good fellowship.”

Mike and Ruth Abrams traveled extensively and collected art, from Renaissance paintings and pre-Columbian pottery to a Frank Stella Etch-A-Sketch drawing. They donated several artworks to the Herbert F. Johnson Museum of Art, including the ca. 500 A.D. Roman mosaic of a lioness attacking an ibex that hangs in Goldwin Smith Hall near the Department of Classics.

Mike Abrams, at 100, reflects on a life in letters