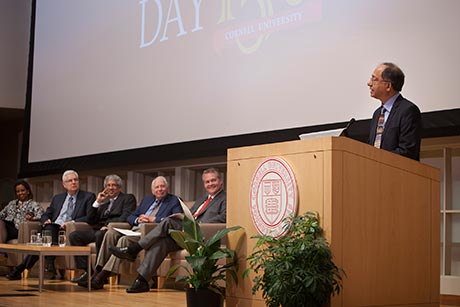 Six alumni and faculty offered an overview of Cornell’s contributions to poverty and development economics in a Charter Day Weekend panel April 25 on campus.

Among many key contributions, Basu mentioned the work of panelist Erik Thorbecke, Cornell’s H.E. Babcock Professor of Economics and Food Economics Emeritus, to develop the Foster-Greer-Thorbecke (FGT) Measure. Chris Barrett, the David J. Nolan Director of the Charles H. Dyson School of Applied Economics and Management, called the FGT method “the workhorse way of how we measure poverty throughout the world.”

Basu commented on his own scholarship on the economics of child labor and Barrett’s “large body of work” on measurements of food insecurity, especially among small farmers in developing countries.

With a wide variety of scholarship “spread across nearly a century…, it would not be presumptuous to refer to this as the Cornell school of development,” he said.

Debraj Ray, M.A. ’81, Ph.D. ’83, a development economic theorist at New York University, talked about the acceleration of development. In 1780 it took 58 years for the United Kingdom’s median economy to double; by 1980, China’s economy was doubling its per capita income every seven to nine years, he said.

This rapid growth feeds aspirations of the poor that cannot be easily met, which in turn “gives rise to… frustration and violence,” where growth is very rapid but uneven, he said.

With so many groundbreaking theories from Cornellians, “You need practitioners out in developing countries to put some of these wonderful ideas into practice,” said Richard Stearns ’73, president of World Vision US, a Christian nongovernmental organization (NGO) that targets poverty at the grassroots level in 100 countries. “We are sending people as we speak to Nepal,” he said, referring to the April 25 earthquake.

Addressing root levels of poverty is “exceedingly complex. … It is not as simple as feeding the hungry or giving water to the thirsty,” he said, but involves multidisciplinary expertise.

The last 25 years of progress “in lifting people out of extreme poverty is unprecedented in human history,” he said. The bad news is “extreme poverty is increasingly retreating into fragile states,” such as Syria, Somalia and South Sudan, where it is very hard to work.

Eleni Gabre-Madhin ’86 is an Ethiopian economist and a former chief executive officer of the Ethiopia Commodity Exchange, which she developed to help farmers know prices of crops and improve profits, a system she is helping to establish across Africa.

At Cornell, she experienced a turning point when the Ethiopian famine struck in 1984, and a wasteful nightly food fight broke out in her dining hall. She stood on her chair and shouted “Stop!” only to have food thrown at her. After writing an op-ed chastising such apathy in The Cornell Daily Sun, she said, “inside something had changed,” and she rededicated herself to “working to counter poverty.”

The discussion ended with a short video that showed a sampling of Cornell student groups today making strides to end poverty in Haiti, Ghana, Kenya, India and Nicaragua.