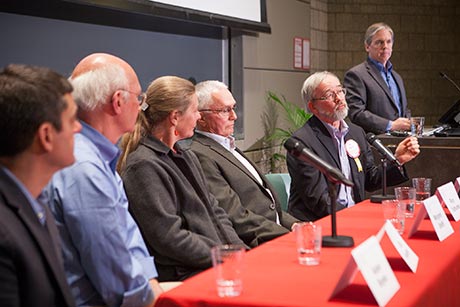 Hip dysplasia, Tay-Sachs, spina bifida: such genetic mutations can wreak havoc on our lives. Technological advances have made identifying these and other harmful genetic variations possible, but greater information also has resulted in significant challenges. Parents are now faced with the question, "What constitutes a mutation of sufficient severity that the fetus is unwanted?"

A panel of experts explored this and other questions at a Charter Day Weekend panel, “The Genomic Revolution: How DNA Information Is Changing Our Lives,” moderated by Stephen Hilgartner ’83, Ph.D. ’88, professor of science and technology studies, April 26.

“Every one of us should care about our genome,” said Charles Aquadro, director of the Cornell Center for Comparative and Population Genomics (3CPG) and professor of molecular biology and genetics in the College of Arts and Sciences, “because knowing something about your genome can have a big impact on the quality of your life.” For example, because of a genetic variant, more than half the world’s population can’t digest milk past the nursing age.

Genetic testing is already a part of our world, said Aquadro. For example, he noted that all NCAA athletes – including 10 percent of Cornell students – are required to undergo genetic testing for sickle cell trait, a result of several training deaths being traced to the disease. But researchers also have discovered a surprisingly positive side to the sickle cell gene: It conveys protection against malaria.

Currently, the approach to newborn genetic screening is to only test if there is a meaningful intervention available to help the child, said Dr. Philip Reilly ’69, a partner in Third Rock Ventures. “But the rapid improvements in DNA sequencing have set the technological stage for a massive increase in carrier testing and prenatal screening.” In 1972, for example, the Jewish community adopted Tay-Sachs screening for potential marriage partners; since then, Tay-Sachs in that population has fallen 95 percent.

Reilly asked, “Will we adopt a new eugenics, consumer-driven and technologically enabled? Will we be seduced by DNA testing, not only to avoid diseases in children but to seek ‘superior’ traits?”

Genomic technologies already have led to superior crops that are insect-, herbicide- and virus-resistant, said Margaret Smith, Ph.D. ’82, professor of plant breeding and genetics. Genetic engineering has not, however, led to increased crop yield potential, a trait influenced by the entire genomic structure of a plant.

Combining genomic knowledge with natural recombination of the built-in genetic code, said Smith, is the more powerful approach, “to understand better how crops work, and then breed plants that can sustainably meet future needs and grow more food on less arable land.”

Humanity has been engaged in a vast genomics project for hundreds of years, noted Rory Todhunter, Ph.D. ’92, the Maurice R. and Corinne P. Greenberg Professor of Surgery at the College of Veterinary Medicine. “We have designer dogs, cats, horses and chickens. The problem is that, in selectively breeding animals, we’ve concentrated deleterious [genes].”

The concentration of these problematic genes in purebred animals, however, has been a boon to researchers. The Cornell Veterinary Biobank contains genetic information about more than 15,000 animals, information that is proving useful for animal as well as human medicine. “Most of the diseases and traits which we’ve mapped with these animals have human analogs,” said Todhunter.

Adam Boyko, assistant professor of biomedical sciences, said DNA sequencing has shown us that humans and chimps share 98 percent of their genetic material.

Not only can we sequence the entire human genome, he noted, we also can sequence tumors and RNA – and we can sequence the past. Researchers have sequenced almost an entire Neanderthal genome from a finger bone, as well as identifying a new human ancestor using a bone and a tooth.