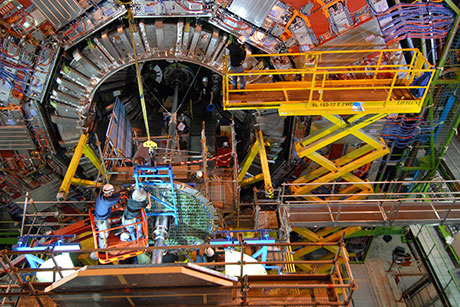 CERN
Construction on the Compact Muon Solenoid detector at the Large Hadron Collider in Geneva, Switzerland. 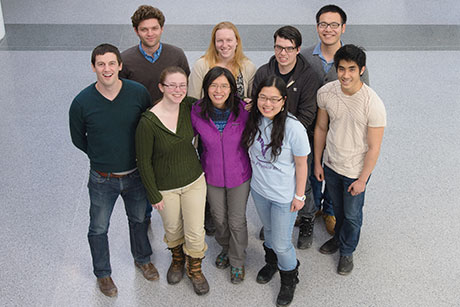 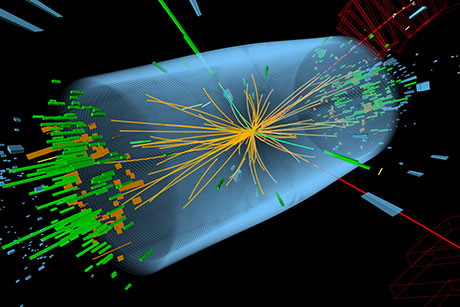 CERN
One of millions of proton collisions recorded in 2012. Detected are two muons and two electrons, and many other particles that are consistent with the decay products of a Higgs Boson. The blue shows the outlines of the detector components, green blocks represent energy deposited in the detector and orange represents reconstructed particle tracks.

When Kevin McDermott and Susan Dittmer talk about what they might discover when their particle detector goes back online in Switzerland, it’s a little like talking to a 5-year-old on Christmas Eve.

There’s a twinkle in their eyes, and it’s hard to keep them from literally fidgeting in their seats. These Cornell physics graduate students have grand ideas for what they might find once their detector, the Compact Muon Solenoid at the Large Hadron Collider (LHC), begins recording data again later this year – new particles, evidence of supersymmetry, an explanation for dark matter and extra dimensions may be discovered.

“It would be great if new particles were showing up every day,” McDermott said. “Even if just one of them showed up.”

McDermott and eight other grad students are headed back to Switzerland to continue their work, which includes taking shifts in a control room, calibrating equipment, and recording and analyzing data before the detector goes back online.

The LHC is the most powerful particle accelerator in the world, hosted at CERN, the European Laboratory for Particle Physics. At CERN, 21 member states collaborate to study the fundamental particles of matter. Founded in 1954 to bring European scientists together, the Geneva laboratory is perhaps best known as the place where the Higgs-Boson was discovered in 2012. More than 1,000 scientists from around the world work at CERN.

For the past 18 months or so, the LHC has been shut down to refurbish the superconducting magnets. When it goes back online, it will produce particle collisions at energies that were impossible to reach before, Thom-Levy said.

“There is again the possibility of never-before-seen physics,” she said. “Many theories have been shown to work mathematically, but only the detectors make it possible to test them experimentally.”

The results could help answer questions about dark matter and tell scientists more about the recently discovered Higgs-Boson and other mysteries of the universe, she said.

Because the number of collisions created in the detector will be so large, grad students working there not only need training in particle physics but also advanced programming skills to “discover small signals in a vast background” of data, Thom-Levy said.

Those small signals are what make the students eager to return.

“It’s a very exciting time to be going there. It’s like opening up a box and you have no idea what could be in there,” said grad student Margaret Zientek. “I’m also excited to meet people who I’ve only interacted with through emails and video.”

Cornell undergraduates in physics and engineering also have been working on projects related to the Compact Muon Solenoid, Thom-Levy said, including R&D for future upgrades of the detector. Some of the students are working at the Cornell NanoScale Science and Technology Facility, creating prototypes that will inform the choice of technology for the upgraded detector.

“We’re lucky to have a little time before we have to deliver this new detector,” Thom-Levy said. “We’re in this for the long run. The upgrade isn’t planned to go online until 2020, and a lot may happen before then.”