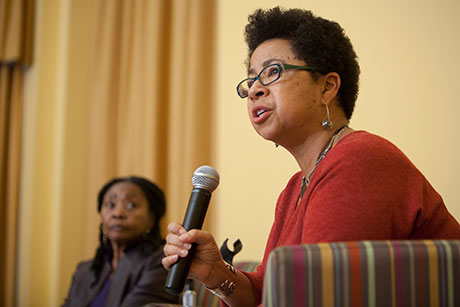 Activist, scholar and writer Barbara Ransby led a community conversation about the social history and current state of activist movements fighting the oppression of black Americans April 8 at the Africana Studies and Research Center.

Ransby expressed her appreciation for the forum’s inclusion of individuals inside and outside the Cornell community: “It’s really important to open up the university, and to fight the isolationism and racism that divides universities from communities and puts universities often in conflict with and antagonism with communities.”

Ransby and participants discussed the ways activists have and can continue to fight oppressive institutions structured to violently control, instead of protect, Americans with black and brown skin by identifying, “… the precise mechanisms by which we are being held down in this moment. That precision is going to influence the strategy and effectiveness of this resistance.”

Today’s movement “is so sharp in targeting state violence, to say ‘we understand the linchpin of what controls our communities.’ We’re not asking for inclusion – we’re critiquing one of the mechanisms of that containment and control,” Ransby said.

The “black lives matter” movement has focused attention on the prison-industrial complex and state violence as two powerful oppressors. While it’s important to prosecute police for unjust brutalities, she said: “We need to think about holding a system accountable, not just individual cops. Thinking ‘oh we got a bad cop’ takes the focus off of the fact that part of the job of police forces now is to contain and control black communities, particularly black and brown youth. That’s in the job description.”

To address systemic racial discrimination in the justice system and our capitalist economy, Ransby argued, “We need more people working on the outside [of institutions such as government, nonprofits, etc.] who are not just navigating the labyrinth of bureaucracy inside various kinds of structures.”

Formal channels to bring about economic and social change (i.e., electoral politics) were not created in the interests of Americans of all colors and often function to repress black Americans, Ransby said. Protest and disruption are examples of  “outside” mechanisms required to fight oppressive ideologies and practices.

Ransby referenced a statement Baker made in 1969: “In order for us as poor and oppressed people to become part of a society that is meaningful, the system under which we now exist has to be radically changed. This means that we are going to have to learn to think in radical terms. I use the term radical in its original meaning – getting down to and understanding the root cause. It means facing a system that does not lend itself to your needs and devising means by which you change that system.”

Groups of young activists such as Dream Defenders, Black Youth Project and Injustice League Organizers are effective mobilizers of the movement, Ransby said, disputing the perception that the movement is leaderless.

A successful movement also will harness the power of individuals and groups, she said. “I think we also have to navigate ways in which those of us who are politically and ideologically in solidarity, but who have a little bit of privilege – that is heterosexual privilege, white privilege or citizenship status, class privilege – how we can put that little bit of privilege to use and risk some of that privilege as a way of opening up the possibilities.”