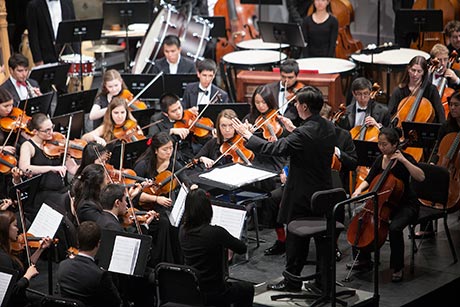 Lindsay France/University Photography
Under the direction of Chris Younghoon Kim, the Cornell Symphony Orchestra performs at "My Cornell: A Celebration of Words and Music." 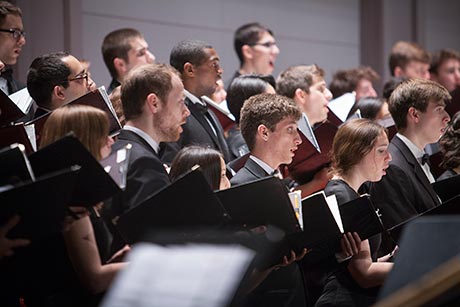 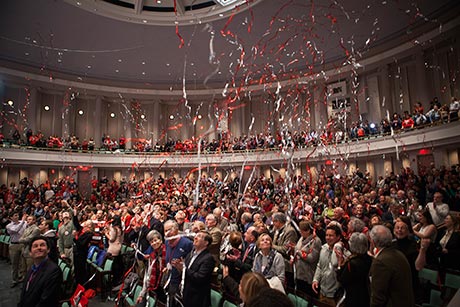 Lindsay France/University Photography
Streamers celebrating the sesquicentennial fall gently over the audience after the alma mater.

Merging the past, present and future, the Cornell Symphony Orchestra, the Cornell Chorus and the Cornell Glee Club performed a concert tailored for the sesquicentennial, “My Cornell: A Celebration of Words and Music,” at a packed Bailey Hall April 25.

The program began with the Cornell Chorus and the Glee Club, under the direction of conductor Robert Isaacs, singing a Civil War-era spiritual, “When I’m Gone,” arranged by composer Richard Allain.

Ernste’s piece was an electronic interpretation of the Cornell chimes stretching, manipulating and filtering the last five notes of the alma mater to produce new sounds and harmonies. The composition swelled with the voice of soprano Judith Kellock, professor of music, who died March 27.

“The melody was constructed, note-by-note, from a combination of source recordings, projects that [Kellock] and I worked together on over the years,” said Ernste. “I specifically sought to undermine any perceptible language, transcending words in order to more directly convey the indelible timbre of her unique voice. I was pleased to discover that many of my colleagues and students, those close to her, immediately recognized the source.”

Ernste continued: “The idea of using of Judy's voice was one that I couldn't avoid. It anchored the piece, for me, in people and work, rather than the institution. Or perhaps I simply needed the joy of performing with her one last time, something my particular form of expression, with electronic sounds, makes possible.”

After the readings, the Cornell Symphony Orchestra, under conductor Chris Younghoon Kim, played two movements – Unicorns and The Phoenix – from “Carnaval,” composed by Roberto Sierra, professor and interim chair of the Department of Music.

With a nod toward Cornell's global reach and the diverse, international scope of its student body, the Glee Club and Chorus sang three folk songs: “Molihua,” a Jiangsu folksong; the Finnish traditional song “Armottoman osa”; and “Meguru,” a Namibian song.

After Robin Davisson, professor of molecular physiology, and David Feldshuh, professor of theater, read quotations from the new Sesquicentennial Grove, the symphony orchestra played the finale from Second Concerto for Orchestra, composed by Steven Stucky, professor of music. The piece, commissioned by the Los Angeles Philharmonic, won the Pulitzer Prize in 2005.

The Chorus, the Glee Club and the Symphony Orchestra then performed “Strike Up a Song to Cornell,” “Cornell Victorious,” “My Old Cornell” and “Give My Regards to Davy,” freshly arranged by Tom Schneller, DMA ’08.

President David Skorton accompanied the “Evening Song,” on his flute, and the program ended with Schneller’s new arrangement of the alma mater.

The Chorus and the Glee Club began Charter Day festivities early with a performance in Carnegie Hall in New York City April 19. The groups performed “Alleluia” composed by Randall Thompson. With the American Symphony Orchestra, conducted by Leon Botstein, they sang “Dream-King and his Love, Op. 31,” with a solo performance by tenor Phillip Fargo ’16, and finished with the world premiere of Sierra’s “Cantares” – to a standing ovation.

The students commissioned Sierra’s “Cantares” about three years ago, in anticipation of the Sesquicentennial. Isaacs said: “It’s a remarkable achievement for an undergraduate group to commission a major new work, and to successfully negotiate with a professional ensemble to collaborate and to perform it on the most famous concert stage in the world.”

“Cantares” will be performed by the Chorus and the Glee Club, with the Cayuga Chamber Orchestra, on Saturday, May 2, at 7:30 p.m. at Ford Hall, Ithaca College.