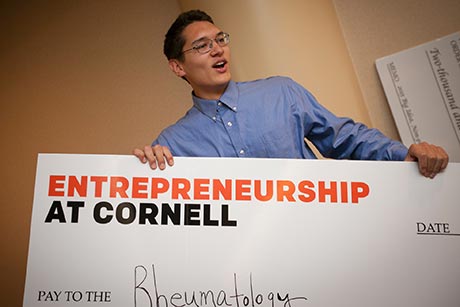 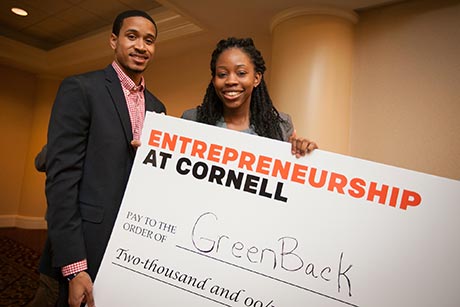 Jason Koski/University Photography
Noel Alexander ’16 and Iyore N. Olaye ’16, both students in the College of Engineering, took home first prize in the nonprofit category for “GreenBack,” a scholarship management tool to help students take advantage of their awards without reducing financial aid they receive from their universities.

In the undergraduate Big Idea competition, Alexis Osler ’17, a student in the College of Arts and Sciences, won first prize in the for-profit category for his software idea, “Rheumatology,” a tool to help doctors provide better care for arthritis patients. Iyore N. Olaye ’16 and Noel Alexander ’16, both students in the College of Engineering, took home first prize in the nonprofit category for “GreenBack,” a scholarship management tool to help students take advantage of their awards without reducing financial aid they receive from their universities.

Osler’s first slide in his Big Idea presentation was a smiling photo of his mother, a rheumatologist and the inspiration for his idea, he said. His iPad app would allow doctors to easily input information into their computers while talking to patients, instead of using paper charts and transcribing them.

“My big idea could help 52 million people with arthritis,” he said. “And it would also help hardworking physicians like my mom get home a little earlier each night.”Olaye and Alexander’s idea would create a nonprofit to separate scholarships from consideration by universities when offering financial aid packages to students. Currently universities count scholarships as part of the family’s contribution and reduce financial aid by the amount of the scholarship.

In the Student Business of the Year competition, Pablo Borquez, MBA ’15, won for Produce Pay, an online payment system for farmers, distributors and lenders that speeds up the payment process for farmers and helps them track sales and improve efficiency. Borquez was also named the winner in the Cornell Venture Challenge, sponsored by BR Ventures at Johnson.

Borquez, who was raised on a fourth-generation family farm in Mexico, got his Cornell MBA after more than 10 years working in the produce industry. He sought a solution to a perennial problem for farmers around the world: managing cash flow during planting and harvest. His Web-based financing solution gives farmers immediate access to financing and liquidity.

Also at the Celebration conference, eLab’s Demo Day featured presentations by 10 teams of undergrad and grad students who are part of the eLab program, which involves weekly class meetings, access to business resources, alumni and teaching team mentorship.

The year-long process helps some teams refocus their idea – changing a company focus on headphones for parties to one focused on headphones for senior living communities, for example – grow their company or even abandon their plan altogether.

“All of our companies are in different phases,” said Ken Rother, entrepreneur in residence at Launch NY and a member of the eLab teaching team. “Some of them come in already making revenue, some have a ton of customer development work to do, some are just figuring out what the features of their product are going to be and some figure out during the year that this isn’t the company to pursue right now.”

During Demo Day, all 10 teams offered polished presentations of their businesses, which range from an application that allows viewers to immediately purchase items they see on their favorite TV shows to small wireless sensors that measure soil conditions, allowing vineyard owners to optimally irrigate fields.

Rother said Demo Day gives students a chance to showcase their work and move to product launch, investment or transfer to an incubator.