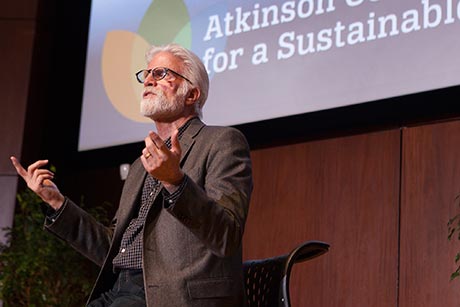 Robert Barker/University Photography
Actor and activist Ted Danson speaks about his passion for protecting the oceans during the Jill and Ken Iscol Distinguished Environmental Lecture April 20.

On April 20, delivering the Jill and Ken Iscol Distinguished Environmental Lecture on campus, actor and activist Ted Danson spoke candidly about his upbringing. He said the academic influence of his father and his mother’s spirituality provided him with the two pillars that guided him through his journey of ocean advocacy.

Danson became interested in ocean conservation in 1982 after moving to a California neighborhood that had been fighting to keep oil drilling away from the coast and its nearby beach. Danson organized alongside his neighbors “to put the whole proposition into an initiative on the ballot to vote on citywide.” As a result of Danson’s efforts, “there can never be any oil drilling along the Santa Monica Bay.”

“We actually started becoming friends with oil company executives,” Danson recalled. “We kept doing battle with them, but they are decent nice guys… we ended up finding a way to work together” on a used motor oil recycling program. Without engaging business, Danson believes, environmental conservation is hopeless.

When the American Oceans Campaign merged with Oceana, the world’s largest ocean conservation and advocacy organization, in 2001, Danson considered leaving the organization but found that Oceana was “such a bright group of people” that he opted to stay and has been on the board of directors since.

Danson describes his current role at Oceana as “the guy who stands in front of the tent and says thank you for watching… do me a favor and meet this [Cornell professor] Drew Harvell, meet this marine biologist who has something incredibly interesting to tell you. …I’ve always used my celebrity that way. It’s really what the book is about… I am the celebrity waving the red flag” to raise awareness.

Danson’s awareness campaign is primarily concerned with overfishing. He explained how from 1988 onward “world fish catch has declined every year.” Big fish such as sharks, tuna, swordfish and marlin have “been depleted by 90 percent” since the 1950s. Currently, “70 percent of the world’s fisheries are either fully fished or overfished.” Overfishing occurs when “bottom trawlers,” fishing vessels the size of a “Navy destroyer,” drag massive nets across the ocean floor, indiscriminately trapping aquatic life along the way. The result, “one third of the world’s catch is thrown overboard” every year as “by-catch,” Danson said.

Under the mantra “save the oceans, feed the world” Danson and Oceana have achieved great success in decreasing wasteful overfishing. Oceana has helped to sequester more than one million square miles of ocean bottom as off-limits to bottom trawlers, shut down multiple chlorine plants and helped Chile transition from being “the wild west” of oceanic conservation. Oceana has also influenced upcoming European Union legislation that will have zero tolerance for by-catch and bottom trawling, as well as implementing fishing quotas based on scientific data.

The good news, Danson says, is that most fish populations will reestablish themselves within five years after the cessation of bottom trawling. In WWII, Danson explained, “fish population exploded because no one was fishing… because of the submarines. … The idea works. It’s timely and really, really necessary for the direction this planet is going.”

Fish Tales: How Ocean Conservation Became My Passion” was an event sponsored by the Atkinson Center for a Sustainable Future.