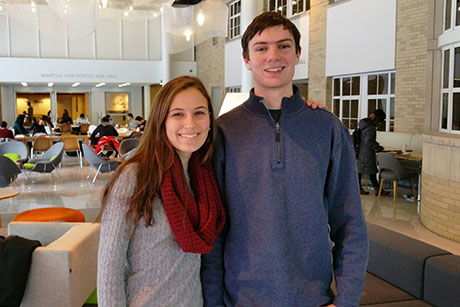 For their academic excellence and advocacy work, Brian Meersma ’18 and Mara Schein ’18 will each receive the Marion Huber Learning Through Listening National Achievement Award at an April 18 gala in Washington, D.C., hosted by Learning Ally, a national nonprofit serving individuals with learning and visual disabilities.

Meersma and Schein, dean’s list students in their first semester at Cornell, have dyslexia and use assistive technology such as text-to-speech software to help them learn and complete coursework. While in D.C., they will meet with congressional staff to advocate for increased funding for the educational needs of those with visual impairments and learning disabilities and hope to inspire other youth facing similar challenges.

Once a self-described “absolutely terrible student” who failed fourth grade spelling, Schein, a Baltimore resident, reached a turning point in ninth grade after she enrolled in a supportive school. Using assistive technology, she could finally complete her coursework and her confidence grew. She later tutored students with learning disabilities and became interested in social inequality and public policy as an intern at the Johns Hopkins School of Education.

“I realized how lucky I was to have access to assistive technologies because a lot of these kids who I tutored found it really helpful when I could use my computer to read to them,” Schein said. “But when they go home and don’t have access to these tools, there’s not a lot that they can do.”

At Cornell’s College of Human Ecology, Schein is focusing on education policy while also considering a global health minor. Outside the classroom, she serves on the Peer Review Board, works as a research assistant in Professor Rosemary Avery’s policy analysis lab, and participates in Cornell’s Ski Club. This summer, Schein plans to intern with Sen. Barbara Mikulski (D-Md.).

“I try to update my blog as much as I can around my classes and different assignments,” he said. “It’s definitely continuing to be used as a resource – in March I had more views than in any other month since I started the blog.”

In high school, Meersma led a summer reading club for students with dyslexia, and he frequently gives presentations on assistive technology. He also advocates for gifted- and special-education issues, aiming to improve support and access for students with disabilities.

“Recently, there were three bills passed in New Jersey that I helped advocate for,” Meersma said. “Decoding Dyslexia, a group that I’m part of, has been advocating for increasing teacher training in dealing with students who have trouble reading, increasing screening so that kids with dyslexia are identified early and can get the remediation they need, and getting the definition of dyslexia into state education codes.”

Each year, Learning Ally honors exceptional students through the Marion Huber Learning Through Listening Awards, instituted in 1991 for high school seniors with learning differences such as dyslexia. Meersma and Schein are two of six U.S. students to receive this year’s top Learning Ally award.

Sara Birmingham ’15 is a student communications assistant for the College of Human Ecology. En Ting Lee ’17 is a communications intern for the ILR School.