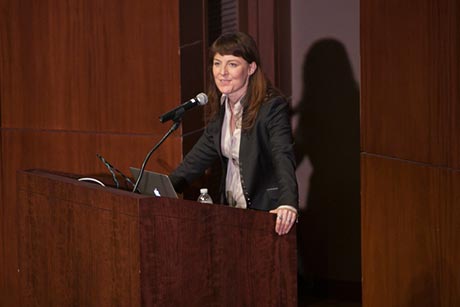 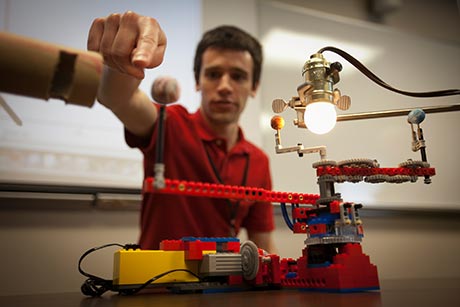 Jason Koski/University Photography
Sean Marshall, a doctoral student in astronomy, demonstrates the celestial mechanics of the solar system, during a break at the Carl Sagan Institute's inaugural symposium May 9. 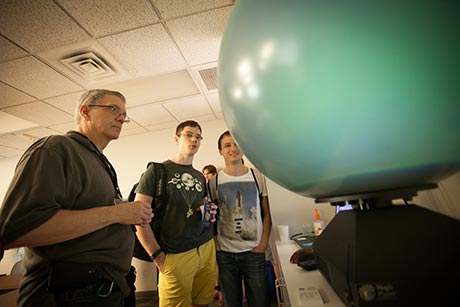 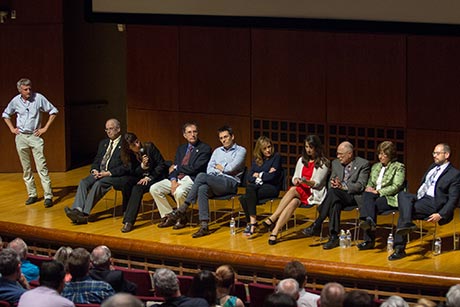 Wading ankle-deep along the shore of the cosmic ocean, scientists from around the world gathered at Cornell May 9 to celebrate and inaugurate the university’s Carl Sagan Institute: Pale Blue Dot & Beyond.

The new institute – designed to find planetary life in the cosmos – brought hundreds of people to Call Auditorium to behold the scientific future. Previously called the Institute for Pale Blue Dots, the new name was announced by Ann Druyan, Sagan’s professional collaborator and widow.

“My pride in Carl is boundless,” Druyan said, “that one man could play such an important role in the science of the Voyager mission – the first great reconnaissance of the outer solar system.” Sagan gave the world a perspective of itself, she said, “not the geocentric delusion … but its reality, its fragility, its tininess in the cosmic context.”

Druyan spoke to the scientists of the new institute and the fulfillment of Sagan’s dream of finding worlds beyond ours. “My hope is that … you and your colleagues will see far and see wonders yet undreamt of in our time,” said Druyan, as she mentioned Sagan and his own mentors. “You will be seeing for them. That’s what science is – a continuity of minds, this community of thought that goes back to the days when we first became human and can possibly take us to the worlds envisioned by the scientists of this institute,” she said.

Organized by Lisa Kaltenegger, Cornell associate professor of astronomy and director of the Carl Sagan Institute, the full-day symposium featured a scientific all-star team for finding planets and the search for life in the cosmos.

The Harvard-Smithsonian Center for Astrophysics’ David Latham explained the challenges in his search that – in the late 1980s – might have yielded possibly the first extrasolar planet ever detected or a failed star. Only upcoming space probes will be able to tell.

Alex Wolszczan, astronomy professor at Penn State, described how he examined pulsars via radio telescopes at Green Bank, West Virginia, and Arecibo, Puerto Rico – finding Earth-mass exoplanets in places where they’re not supposed to be. “Carl Sagan has been my inspiration in my efforts to popularize science,” Wolszczan said.

Didier Queloz, University of Cambridge professor of physics, described how he, as a graduate student, found the first confirmed exoplanet – a planet found beyond Earth’s own solar system – around a sunlike star. Bill Borucki, principal investigator of NASA’s Kepler mission, explained how his mission has found thousands of planets and how every star in our universe has at least one planet. “Earth-sized planets are very common,” Borucki said.

Later, NASA astrobiologist Natalie Batalha described her early college experience reading Sagan’s “Broca’s Brain” and changing her major from business to science. “The book showed me that there is a beauty to science. That it is poetry. That it taps into our sense of beauty for the universe. And that through science we find meaning in our lives,” said Batalha.

Jonathan Lunine, Cornell’s David Duncan Professor of Astronomy (formerly Sagan’s chair), showed how missions in our own solar system are part of this endeavor, to understand potential habitable places like Titan, Saturn’s largest moon. Reading the Titan essay from Sagan’s “Broca’s Brain,” Lunine noted: “Carl says, ‘Despite the low temperatures, it is by no means impossible that there is a titanian biology.’ So if Carl writes that, I think it is worth going to look,” he said.

NASA astrobiologist Lynn Rothschild spoke on humanity’s place in the cosmos, and Dimitar Sasselov, Harvard professor of astronomy, described producing the molecular building blocks of life as notes of music initially described by Sagan. “What I hope to convince you [is] that … maybe soon we’ll hear the symphony,” Sasselov said.

Kaltenegger showed how we can translate the detection of exoplanets, accumulate this scientific information to explore planets and life in the cosmos. She summed up the day’s program: “We really are standing on the shoulders of giants to be able to make this next leap. This whole idea that we can live in a time when for the first time in history we can answer – or at least take a first stab – at the question ‘Are we alone?’ …  If I could pick any time in human history to live, I’d pick exactly this time.”

In closing, Steve Squyres, the James A. Weeks Professor of Physical Sciences, asked all the panelists – gathered together at the end of the day – to predict the scientific future, to which Druyan quipped to laughter and applause, “Prophecy is a lost art.”