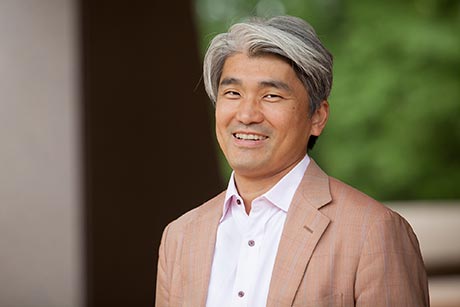 “I look forward to the continued strong growth of international collaborations, research and programming at the Einaudi Center under Hiro Miyazaki’s proven leadership,” Katz said. “His dedication to developing partnerships across campuses and continents will play a major part in making Cornell a truly international university.”

Spitz said she looks forward to working closely with Miyazaki on internationalization efforts. “Hiro is widely respected among his colleagues and students,” Spitz said. “He is deeply committed to collaborative and interdisciplinary research and teaching. And his work – both as a professor and as director of the East Asia Program – has focused on improving the lives of others, both in Ithaca and around the world.”

Under Miyazaki’s directorship, the East Asia Program has developed four new initiatives – Contemporary China, Global Finance, Korean Studies and Translation Studies – and has strengthened its cross-campus and transnational collaborative partnerships. Miyazaki will continue to serve as coordinator of the Global Finance Initiative.

Miyazaki joined Cornell in 2002 following a postdoctoral associate appointment at Yale University in the Council on East Asian Studies and the Department of Anthropology. His current research focuses on public and corporate debt and debt relations in post-Fukushima Japan.

He has published extensively on theories of exchange, futurity and hope. He has authored numerous articles, chapters and several books, including “Arbitraging Japan: Dreams of Capitalism at the End of Finance” (University of California Press, 2013) and “The Method of Hope: Anthropology, Philosophy, and Fijian Knowledge” (Stanford University Press, 2004).

Miyazaki received his doctorate in anthropology from the Australian National University (1998), where he was trained as a specialist on Fiji and the Pacific Islands. He subsequently developed an ethnographic study of the Japanese financial markets and contributed to the establishment of the interdisciplinary field social studies of finance. He holds a master's degree in social anthropology (Tokyo Metropolitan University, 1992) and a bachelor's degree in American studies (Sophia University, Tokyo, 1990).