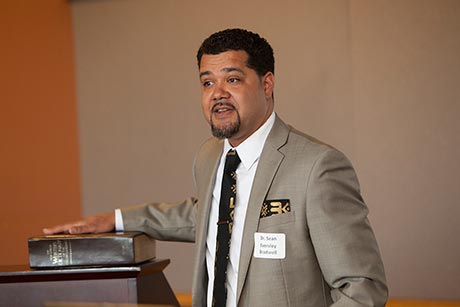 Members and allies of the Men of Color and Women of Color Colleague Network groups met at the Robert Purcell Community Center for a networking luncheon May 4 to review accomplishments and to discuss the concepts of purpose and power.

Ron Huggins, a Cornell financial analyst and vice chairperson of the Men of Color Colleague Network Group (MCCNG), reviewed the last two years of MCCNG events and programming and Sean Eversley Bradwell, Ph.D. ’09, assistant professor at the Center for the Study of Culture, Race and Ethnicity at Ithaca College, gave the keynote address, “The Ability to Achieve Purpose.”

Drawing from his life and from the works of Martin Luther King Jr., Bradwell said most people of color go into careers in higher education because they believe in a higher calling and in the adage, “lift and climb.” Quoting King, Bradwell said, “Power properly defined is nothing but the ability to achieve purpose.”

His talk centered on the power of words; knowledge-based power; the power to amass strength not to oppress but to set the agenda, to influence others, to reach the “real end” of justice and love.

It is not power itself but power unequally distributed that is the problem, Bradwell said. “The hardest work I have with students is to convince them they belong,” he said.

Bradwell presented several strategies that people of color can use to survive in predominantly white organizations:

“If we start to think about our purpose in terms of the power that we wield, we can start to make some significant changes,” Bradwell said.

Huggins reflected on the accomplishments of the MCCNG 2013-15, including holding talks by Cornell administrators on moving up in higher education, on men of color “success stories” at Cornell, on the Toward New Destinations initiative and on enhancing resume, interview and negotiating skills. Formed to “provide a professional support system within the staff, faculty and administrator community to increase the recruitment and retention of men of color,” the group has grown by 40 percent over the past two years.

Jarrel Johnson, program manager of the Posse Program and a member at large, spoke about the fellowship he has found within the MCCNG and the opportunity it has given him to give back to the community.

Sly Mata, associate director of academic services and diversity for the College of Architecture, Art and Planning and a member at large, said that the group was “very impactful” for him: “We are the role models and mentors that [younger students] are looking to.”

Trey Waller, director of the McNair Scholars Program and MCCNG chair, closed the event and thanked Cassandre Joseph, director of diversity engagement and career/life programs, for her vision to launch this group in 2011.