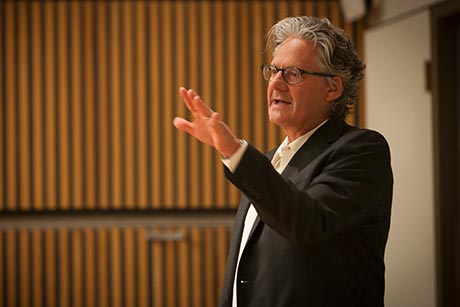 John Blume, the Samuel F. Leibowitz Professor of Trial Techniques and director of the Cornell Death Penalty Project, delivers his “Last Lecture,” part of a series sponsored by Mortar Board, a national senior honor society.

One in 100 adults in the U.S. is in jail or prison. One-third of all American black males are in jail, in prison, on probation or on parole. And the U.S. death penalty system has a shocking 1 in 9 error rate.

“[In] what other type of program would we tolerate a rate of one to nine? Would you fly if one in nine jets crashed?” asked John H. Blume in his “Last Lecture” at Cornell April 29.

Blume, the Samuel F. Leibowitz Professor of Trial Techniques and director of the Cornell Death Penalty Project, spoke of the challenges he’s faced as a defense lawyer for people on death row and the life lessons he’d like to impart to young students.

One such challenge, Blume said, came in the late 1980s when a black man he represented named Leroy Joseph Drayton wrongfully sat on death row, accused of kidnapping, raping and murdering a young white woman. Blume said the judge on the case rejected the testimonies of all the defense’s black witnesses, choosing to believe one white woman’s account for the prosecution.

Upon further investigation, Blume found strong evidence that the judge was racist, and he had to decide whether to file a recusal motion asking the judge to step down from the case. “I knew in my heart that if I didn’t file this motion, if I didn’t do the right thing – if I compromised on that, especially with someone’s life on the line – what kind of person would I be?”

The story did not end well, said Blume. The judge trash-talked him for the rest of his life, tried to get Blume’s law license taken away, and rejected the motion. However, Blume said, when people face defining moments like these in their careers, integrity must be upheld: “Once you decide to do what is expedient instead of what is right one time, you’ll do it twice. And once you do it twice, you’ll do it three times.”

In fact, injustice, much of it racial, was what prompted Blume to become a defense lawyer. Years earlier, while working in juvenile justice, Blume said he went to a “roll call,” where all persons charged with a crime convene at a single location. “It was like a slave ship had pulled up and docked in the port of Charleston,” said Blume, referring to the staggering number of black men. “It [was] a shocking visual representation of how the modern American criminal justice system has destroyed many communities of color.”

A moral opponent of the death penalty, Blume also addressed the incorrect notion that capital punishment is only reserved for the most horrible offenders: “You do not get the death penalty in this country for committing the worst crime. You get the death penalty for having the worst lawyer.” He compared the system to a shark net that invariably catches harmless sea animals in addition to the cold-blooded killers. “It’s designed to get the really bad predators, but once you put it into effect, that’s not the only people you’re going to get,” he said.

“America cannot claim to be the global defender of democracy and liberty as long as it commits the type of injustice I have briefly described to you this afternoon,” Blume concluded.

“Last Lectures” is a series sponsored by Mortar Board, a national senior honor society.