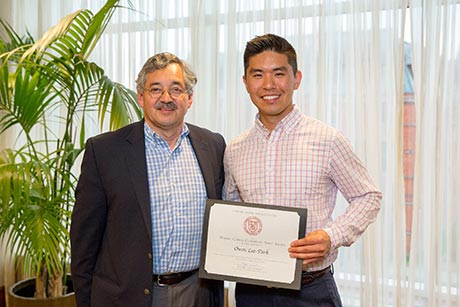 The Maribel Garcia Community Spirit Award for Remarkable Contributions to the Spirit of Humanity is awarded each year to a Cornell student who creatively serves their community. This year, the Cornell Public Service Center honors Owen Lee-Park ‘15, with the Maribel Garcia Award for his work with Cornell’s Prison Education Program (CPEP) and Writer’s Bloc.

The Garcia award honors the memory of Maribel Garcia ’95, who dedicated herself to public service throughout the Cornell and Ithaca communities.

Lee-Park, a senior in the College of Human Ecology, volunteered for a number of semesters as a teaching assistant for CPEP before becoming president of Writer’s Bloc, a student-run journal that publishes the literature and art of prisoners and Cornell students. Lee-Park revived the club, provided prisoners with an outlet to express their creativity and raised awareness about CPEP opportunities in the Auburn (New York) Correctional Facility.

According to the selection committee, “we honed in on Owen Lee-Park because of his work with inmates at Auburn Prison. Maribel herself was a volunteer at Auburn, so we saw this as a perfect match. While Maribel would visit the prison and sit with inmates listening to their stories, Owen is inspiring their creativity and self-worth with the rehabilitated and re-launched Writer's Bloc literary journal ... Owen's focus and creativity speak to Maribel's passions as a writer and caretaker, so we're really excited to honor him with this year's award.”

Lee-Park said, “I am very honored to have been able to represent the values of tireless volunteerism and creativity that Mirabel lived by. I also felt both astonished and delighted when I learned that Mirabel used to volunteer at Auburn Prison as well, which is a truly innovative and extremely important initiative that Cornell and its Prison Education Program have been undertaking for years.”

Lee-Park will be honored at the Cornell’s Public Service Center’s End of Year Dinner.