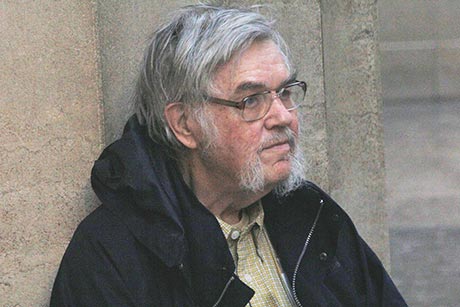 Provided
Royall Moore, who died in 2014, left $500,000 to Cornell University to be used for the study of fungi. Though he never received a degree from Cornell, he did do postdoctoral research at the university.

Provided
This drawing, published in 1962 and based on work Moore did at Cornell, described a new genus of fungi called Hiospira, which has spiral spores.

He’s remembered as a dedicated mycologist, a generous brother and a “sweet and down-to-earth” mentor – and now the late Royall Tyler Moore will be remembered by generations of Cornell students as the man who helped make their future in fungi possible.

Moore, an Ithaca-area native who worked as a post-doctoral researcher at Cornell University in the 1960s, died Aug. 17, 2014, in Northern Ireland. He bequeathed almost $500,000 to his former academic home to help students continue the work he loved.

“It just blew me away,” said Kathie Hodge, associate professor of mycology and, since 2011, a digital pen pal of Moore’s. “In his field, he was great, he was a pro. And he was just sweet and down-to-earth.”

A graduate of Michigan State College and Harvard University, Moore never received a degree from Cornell, although he came from a family of Cornellians. His mother, Frances Goodnough ’25, studied English and his father, Ulric Moore ’25, earned a degree in dramatics before becoming a research associate at the Behavior Farm Laboratory of his brother-in-law, Howard Scott Liddell, and earning a doctorate in 1931. The same year Moore received his doctorate from Harvard, 1962, younger bother Kent Moore earned his bachelor’s in fine arts high above Cayuga’s waters.

“He was a good brother,” said Kent, an artist who still lives and works in Ithaca. “He was sentimental, thoughtful … the guy who always made Christmas happen.”

Along with a powerful intellect and his flair for art, Kent Moore said his brother had an early passion for botany as a student at Ithaca High School. He pursued chemistry as an undergrad at Michigan State College, then began graduate work on the taxonomy of fungi at the University of Iowa before joining the Army. In addition to working at Cornell with celebrated mycology professor Richard Korf, Royall Moore did post-doc work at the University of California, Berkeley, and was an assistant professor at North Carolina State University at Raleigh before accepting a post at Ulster University at Coleraine, Northern Ireland, in 1972.

There, Hodge said, Royall Moore built his academic legacy as a careful and steadfast chronicler of new fungi, their structure and their classification. A faculty member in Ulster’s Applied Biological and Chemical Sciences School, Hodge said Royall Moore took advantage of Northern Ireland’s famously fungi-friendly weather, building a catalogue of research that mycologists rely upon today. Before he retired, Royall Moore earned a post on the editorial board of the peer-review journal Mycologist and the Benefactor’s Medal from the British Mycology Society.

Hodge said Royall Moore’s gift will be administered through the Plant Pathology and Plant-Microbe Biology section of the School of Integrated Plant Science in the College of Agriculture and Life Sciences. The precise mechanics of how the gift will be used are still being developed. But Hodge said one thing is certain: Royall Moore’s desire to support students of mycology for generations to come will be honored.

Royall Moore, who died at 83, never married (“came close a couple of times”) and had no children, Kent Moore said. He built his wealth by applying his careful intellect to another passion: investing. But exploring and studying the fungi around him was always Royall Moore’s first love.

“This was his legacy, what he wanted,” Kent said. “He loved it, and his idea was that the study of mycology might continue to benefit mankind.”

John Carberry is managing editor of the College of Agriculture and Life Sciences.