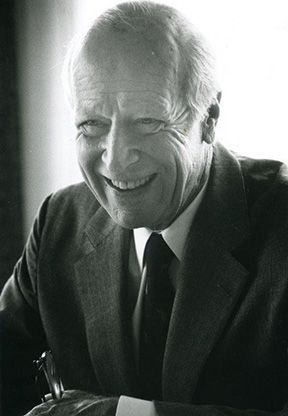 Austin H. “Kip” Kiplinger ’39, chairman emeritus of the Cornell University Board of Trustees and a giant in the fields of publishing, journalism, philanthropy and university leadership, died Nov. 20 in Rockville, Maryland, at the age of 97.

Kiplinger became a trustee in 1960, served as board chairman from 1984-89 and was elected trustee emeritus in 1989, making him the longest-serving trustee in university history.

Kiplinger helped support the creation of what is now the Schwartz Center for the Performing Arts, the restoration of Lincoln Hall for the Department of Music, and served as chair of the presidential search committee that selected Frank H.T. Rhodes as the university’s ninth president.

“The breadth of Austin Kiplinger’s involvement in so many facets of the life of Cornell University, for so many years, has left an indelible legacy for generations of Cornellians in the arts, economics, undergraduate education and through his example of steady leadership,” said Cornell President Elizabeth Garrett. “Kip’s support, wisdom and influence meant a great deal to me even in the few months I was honored to have known him. I was so pleased that he attended my inauguration as Cornell’s 13th president in September – and impressed that of those 13, I am the 10th Cornell president that Kip knew. He was a true Cornellian in every sense.”

“Kip was a legendary Cornellian who loved and gave back to the university in so many ways over many decades,” said Cornell Board of Trustees Chairman Robert Harrison ’76.

Harrison recalled that he first met Kiplinger in 1975 when Harrison was a newly elected student trustee and Kiplinger “was a long-standing, well-respected member of the board. Kip welcomed the involvement of student trustees and went out of his way to engage with us,” Harrison said. “His grace, good humor, wit and oratorical skills were second to none, and he has served as a role model and hero for me and generations of trustees who have attempted to follow in his footsteps as stewards of Cornell University.”

Kiplinger’s son Knight Kiplinger ’69 said, “Among all the institutions that were central to my father’s life – in his personal development and as the focus of his passion – Cornell was Number One.”

As an undergraduate at Cornell, Austin Kiplinger was president of the Cornell United Religious Work Men’s Cabinet, was his class’s orator and served as editor-in-chief of Areopagus, The Cornell Journal of Opinion. He also was active with the Cornell Glee Club, Student Council, Telluride Association, Delta Upsilon and Quill & Dagger.

Kiplinger was editor emeritus of The Kiplinger Washington Editors, publishers of Kiplinger's Personal Finance, The Kiplinger Letter, kiplinger.com and more; he had led the publishing company, founded by his father, W.M. Kiplinger in 1920, since 1959 and served as chairman and president from 1961 to 1993.

Kiplinger began his career as a reporter for the San Francisco Chronicle (1940-41). He served in the Navy during World War II, stationed in the South Pacific. He founded the publication Kiplinger’s Personal Finance with his father in 1947 and also worked as a business columnist for the Chicago Journal of Commerce (1948-50) and as a news commentator for ABC and NBC radio and television (1950-56).

He was a longtime advocate of journalism education and founded the Washington Journalism Center with his father in 1965; the center’s seminars eventually became the core program of the National Press Foundation. Kiplinger became a trustee in 1960 – the result, said Knight Kiplinger, of Kip sitting by chance next to then-trustee Arthur Dean ’21 on an airplane flight from New York City to Washington, D.C., and having an inspiring conversation about Cornell and higher education. When he joined the board, he was its youngest member at age 42.

The most significant issue at Cornell during Kiplinger’s five years as chairman of the board was the pressure by students and faculty to divest Cornell’s endowment of stock in companies doing business in then-apartheid South Africa. Kiplinger supported a policy of selective investment rather than complete divestment, supporting U.S. companies there that were the most progressive employers in that nation. Rhodes cited Kiplinger’s position in a 1989 statement: “We are not doing the easy thing. We are doing the right and responsible thing.”

After Kiplinger stepped down in 1989, Rhodes praised his tenure leading the board “with unfailing calm, courtesy and fairness.”

The Kiplinger family’s contributions to the College of Arts and Sciences include the Kiplinger Professorship in Economics; support for creation of the performing arts center (later named the Schwartz Center for the Performing Arts), including the Kiplinger Theatre; and Kiplinger's leadership as co-chair of the effort to renovate and expand Lincoln Hall. The family recently helped support construction for the nearly complete Klarman Hall. Lindsay France/University Photography
Kiplinger sits on an Arts Quad bench dedicated to him, a gift from his family and friends in 2008.

Across the university, the Kiplinger family were longtime supporters of the Cornell Annual Fund, Cornell’s capital campaigns, the Kiplinger Family Scholarship, student financial aid and other programs. Kiplinger also supported the Lab of Ornithology, where he served as a member of the administrative board and where his late wife, Gogo, is honored with Gogo’s Garden and he with Kip’s Barn.

In 2008, a bench bearing Kiplinger’s name, a gift from his extended family and friends, was dedicated in front of McGraw Hall, near the site where he gave his class oration in June 1939.

Kiplinger was one of the oldest alumni of the Cornell Glee Club and still performed with the group at reunions – most recently at his 75th reunion in 2014.

A recipient of the Frank H.T. Rhodes Exemplary Alumni Service Award, Kiplinger also was honored as a foremost benefactor and presidential councillor.

A memorial service of music and spoken tributes will be held Friday, Dec. 11, at 1 p.m. at the Kennedy Center Concert Hall in Washington, D.C.