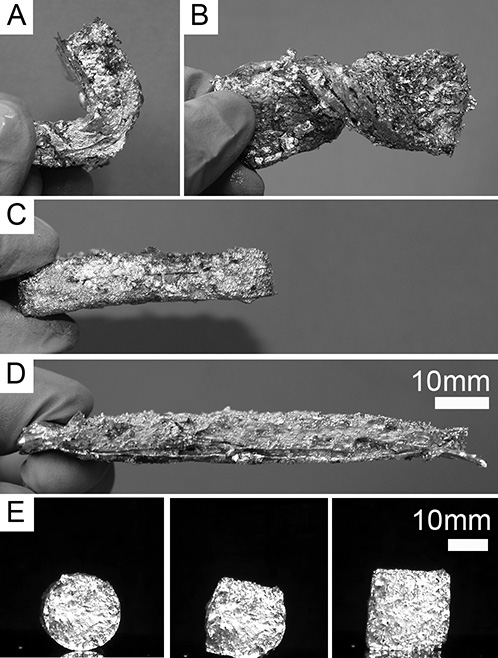 Rob Shepherd group
The metal/foam compound developed in the lab of associate professor of engineering Rob Shepherd can be heated in order to change its shape, then cooled to regain stiffness. It has potential applications in soft robotics and aeronautics.

Imagine an aircraft that could alter its wing shape in midflight and, like a pelican, dive into the water before morphing into a submarine.

Impossible, you say? A little too “Transformers,” perhaps? Well, the U.S. Air Force doesn’t think so, and believes Cornell engineering professor Rob Shepherd and his group might help make that futuristic-sounding vehicle a reality.

The key is a hybrid material featuring stiff metal and soft, porous rubber foam that combines the best properties of both – stiffness when it’s called for, and elasticity when a change of shape is required. The material also has the ability to self-heal following damage.

If you’re thinking T-1000, the shape-shifting android assassin from “Terminator 2,” it’s not quite like that. But you’re not far off.

“It’s sort of like us – we have a skeleton, plus soft muscles and skin,” Shepherd said. “Unfortunately, that skeleton limits our ability to change shape – unlike an octopus, which does not have a skeleton.”

The idea blends the rigidity and load-bearing capacity of humans with the ability to dramatically alter shape, like an octopus can.

“That’s what this idea is about, to have a skeleton when you need it, melt it away when you don’t, and then reform it,” Shepherd said.

His group’s work was published online last month in Advanced Materials and will be the cover story in an upcoming issue of the journal’s print edition.

This work was partially funded by the U.S. Air Force Office of Scientific Research through its Young Investigator Research Program. Shepherd was one of 57 scientists and engineers from 43 research institutions and small businesses who last year earned grants totaling approximately $16.6 million. Shepherd’s grant was earmarked for research into “Co-Continuous Metal-Elastomer Foam Actuators for Morphing Wing MAVs (Micro Air Vehicles).”

This hybrid material combines a soft alloy called Field’s metal with a porous silicone foam. In addition to its low melting point of 144 degrees Fahrenheit, Field’s metal was chosen because, unlike similar alloys, it contains no lead.

“In general, we want the things we make in this lab to be potentially biocompatible,” said Ilse Van Meerbeek, a graduate student in the field of mechanical engineering and the first author of the paper.

The elastomer foam is dipped into the molten metal, then placed in a vacuum so that the air in the foam’s pores is removed and replaced by the alloy. The foam had pore sizes of about 2 millimeters; that can be tuned to create a stiffer or a more flexible material.

In testing of its strength and elasticity, the material showed an ability to deform when heated above 144 degrees, regain rigidity when cooled, then return to its original shape and strength when reheated.

Shepherd said this material would be the skin for a morphing wing, giving the MAV the ability to become an underwater vehicle on the fly.

“If you have a wing that’s really broad, you can’t do that because the wing will break off when it hits the water,” he said. “So you need to sweep it back, similar to what a puffin does, and then go under water. And using that new shape, it could be a propeller-driven ship.”

In addition to a morphing-wing application, Van Meerbeek sees this material being used in soft robots that must negotiate tight spaces.

“It could be used in search-and-rescue robots,” she said. “It would be able to go into dangerous and/or unpredictable environments, and be able to go through narrow cracks, which rigid robots can’t do.”

“Sometimes you want a robot, or any machine, to be stiff,” said Shepherd, whose group recently published a paper on electroluminescent skin, which also has applications in soft robotics. “But when you make them stiff, they can’t morph their shape very well. And to give a soft robot both capabilities, to be able to morph their structure but also to be stiff and bear load, that’s what this material does.”

The work also was supported by grants from the National Science Foundation and the Alfred P. Sloan Foundation.