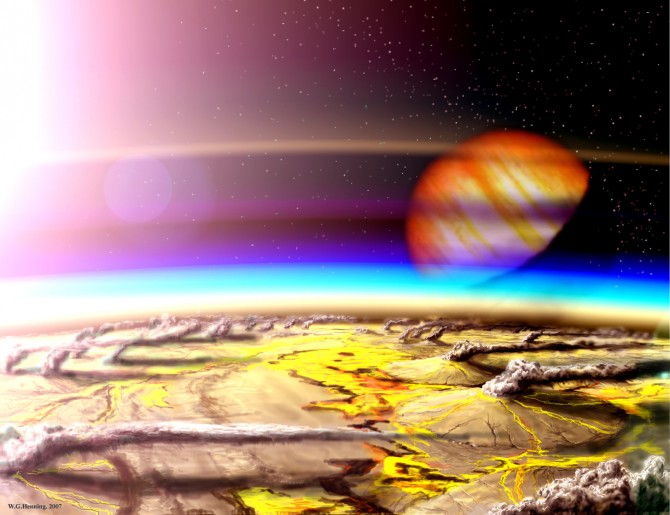 W. G. Henning/NASA
An artistic rendering of an alien world crowded with volcanic activity. The hydrogen from volcanoes can help scientists possibly detect life on exoplanets.

Hunting for habitable exoplanets now may be easier: Cornell astronomers report that hydrogen pouring from volcanic sources on planets throughout the universe could improve the chances of locating life in the cosmos.

Planets located great distances from stars freeze over. “On frozen planets, any potential life would be buried under layers of ice, which would make it really hard to spot with telescopes,” said lead author Ramses Ramirez, research associate at Cornell’s Carl Sagan Institute. “But if the surface is warm enough – thanks to volcanic hydrogen and atmospheric warming – you could have life on the surface, generating a slew of detectable signatures.”

Combining the greenhouse warming effect from hydrogen, water and carbon dioxide on planets sprinkled throughout the cosmos, distant stars could expand their habitable zones by 30 to 60 percent, according to this new research. “Where we thought you would only find icy wastelands, planets can be nice and warm – as long as volcanoes are in view,” said Lisa Kaltenegger, Cornell professor of astronomy and director of the Carl Sagan Institute.

Their research, “A Volcanic Hydrogen Habitable Zone,” is published today in The Astrophysical Journal Letters.

The idea that hydrogen can warm a planet is not new, but an Earth-like planet cannot hold onto its hydrogen for more than a few million years. Volcanoes change the concept.

“You get a nice big warming effect from volcanic hydrogen, which is sustainable as long as the volcanoes are intense enough,” said Ramirez, who suggested the possibility that these planets may sustain detectable life on their surface.

A very light gas, hydrogen also “puffs up” planetary atmospheres, which will likely help scientists detect signs of life. “Adding hydrogen to the air of an exoplanet is a good thing if you’re an astronomer trying to observe potential life from a telescope or a space mission. It increases your signal, making it easier to spot the makeup of the atmosphere as compared to planets without hydrogen,” said Ramirez.

In our solar system, the habitable zone extends to 1.67 times the Earth-sun distance, just beyond the orbit of Mars. With volcanically sourced hydrogen on planets, this could extend the solar system’s habitable zone reach to 2.4 times the Earth-sun distance – about where the asteroid belt is located between Mars and Jupiter. This research places a lot of planets that scientists previously thought to be too cold to support detectable life back into play.

“We just increased the width of the habitable zone by about half, adding a lot more planets to our ‘search here’ target list,” said Ramirez.

Atmospheric biosignatures, such as methane in combination with ozone – indicating life – will likely be detected by the forthcoming, next-generation James Webb Space Telescope, launching in 2018, or the approaching European Extremely Large Telescope, first light in 2024. With this latest research, Ramirez and Kaltenegger have possibly added to that number by showing that habitats can be found, even those once thought too cold, as long as volcanoes spew enough hydrogen. Such a volcanic hydrogen habitable zone might just make the Trappist-1 system contain four habitable zone planets, instead of three. “Although uncertainties with the orbit of the outermost Trappist-1 planet ‘h’ means that we’ll have to wait and see on that one,” said Kaltenegger.

The Simons Foundation and the Cornell Center for Astrophysics and Planetary Science funded this research.

Fuertes Observatory’s new museum goes 'back to the future'