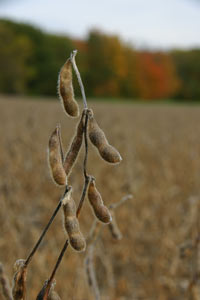 Anja Timm
Soybeans may have a growing season in New York thanks to climate change. 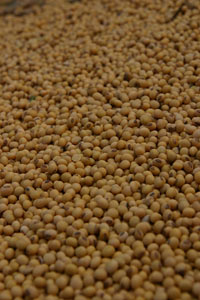 Anja Timm
Researchers foresee and uptick in soybean production on small farms in the state, even in northern New York.

Warmer weather across northern New York could present an opportunity for farmers: soybeans.

The low-input crop is currently commanding a high price, making it increasingly attractive for local growers, according to Cornell crop and soil science professor William Cox.

He has conducted field trials in conjunction with Cornell Cooperative Extension, Cornell Agricultural Experiment Station, the Northern New York Agricultural Development Program and three area farms, and he recently released his results to help growers decide which varieties to plant in 2012.

"The climate in northern New York is no longer too cool to produce soybeans, so mid-season (Group I) varieties are adapted to most of northern New York, and early Group II varieties can mature if planted early near [Ontario] Lake," Cox said. "Although the 2011 growing season was challenging, the trials produced very good soybean yields -- 56 bushels per acre average yield for Group I varieties and 53 bushels per acre average yields for Group II.

"If global warming continues over the next several decades, northern New York may well prove to be the ideal location rather than a marginal region for soybean production," he added.

He added that the high price of soybean meal has more dairy farmers looking to grow their own soybeans and process them in an on-farm or local custom roaster.Areas even farther north have adapted well to the crop, with 659,000 acres grown in Quebec and more than 100,000 acres of soybeans grown in the province of Ontario in 2010, Cox said.

"Soybeans are a low-input crop -- you plant, spray once or twice and harvest. This makes soybeans an attractive crop from a labor management perspective, especially on smaller dairy operations," Cox concluded. "If the current price remains at $11 per bushel, I would expect soybean acreage in New York, including northern New York, to increase in 2012."