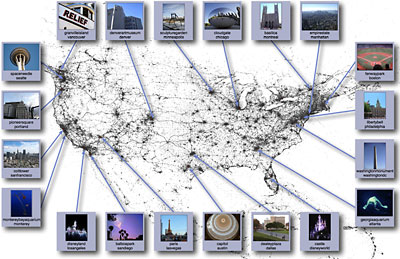 David Crandall
Representative images for the top landmark in each of the top 20 North American cities. All parts of the figure, including images, textual labels and the map itself, were produced automatically from the researchers' geo-tagged photos. Larger version

Cornell scientists have downloaded and analyzed nearly 35 million Flickr photos taken by more than 300,000 photographers from around the globe, using a supercomputer at the Cornell Center for Advanced Computing (CAC).

Their research, which was presented at the International World Wide Web Conference in Madrid, April 20-24, provides a new and practical way to automatically organize, label and summarize large-scale collections of digital images. The scalability of the method allows for mining information latent in very large sets of images, raising the intriguing possibility of an online travel guidebook that could automatically identify the best sites to visit on a vacation, as judged by the collective wisdom of the world's photographers.

The research also generated statistics on the world's most photographed cities and landmarks, gleaned from the analysis of the multi-terabyte photo collection:

The researchers developed techniques to identify places that people find interesting to photograph, showing results for thousands of locations at both city and landmark scales.

"We developed classification methods for characterizing these locations from visual, textual and temporal features," said Daniel Huttenlocher, the John P. and Rilla Neafsey Professor of Computing, Information Science and Business and Stephen H. Weiss fellow. "These methods reveal that both visual and temporal features improve the ability to estimate the location of a photo compared to using just textual tags."

Paul Redfern is an assistant director at the Center for Advanced Computing.