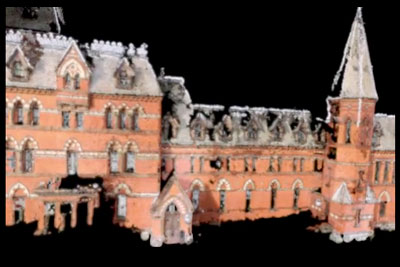 PhotoCity
A 3-D model of Sage Hall, assembled from photos contributed to the PhotoCity game. Online, the model can be viewed from many different angles. Parts of the building that did not appear in any photos so far (e.g., the roof) are still missing.

The game is afoot!

Literally. To play PhotoCity, you have to get up from your computer and walk around campus. There are no prizes -- yet -- except the satisfaction of helping to build a 3-D computer graphic model of the Cornell campus, and some bragging rights.

The model will be built using software developed by Noah Snavely, assistant professor of computer science, and colleagues Prof. Zoran Popović and graduate students Kathleen Tuite and Dun-Yu Hsaio.at the University of Washington, where Snavely studied before coming to Cornell. The software knits together still photos of an object taken from many angles to create a 3-D model. Snavely has already used it to create 3-D models of famous landmarks, using photos collected from Internet photo-sharing sites. It also is used by Microsoft's PhotoSynth service, which allows users to create 3-D models from their own collections of photos.

Other applications may lie in archaeology, ecology and the modeling of museum artifacts, Snavely said.

PhotoCity is a "game with a purpose," Snavely said, where people play for fun but accomplish something useful. It is also a bit of a social experiment. "We want to see if it's possible to get people to go out in the world and actually do something physical," he explained.

in PhotoCity, the more pictures people take of Cornell buildings, the more complete and detailed the models of the buildings will become. Players can accumulate points by taking photos that add to the model, and as the game progresses, whoever contributes the most points to a building "owns" the building, or as Snavely put it, becomes the landlord. No, you don't get to charge rent, but Snavely said that in the future some actual prizes may be placed in buildings, with the locations to be revealed to those who take the right pictures.

Overlaid on this is a team competition. Everyone who signs up to play will join one of four teams, and teams will compete in a sort of Capture the Flag game, vying to hold virtual flags on each building. The same game is in progress at the University of Washington and in the International District of Seattle. Snavely is planning to launch a version in New York City, and perhaps other cities.

There are two ways to contribute photos:

Either way, flags will show where photos are needed to extend the model. Right now, the Web site displays models of seven Cornell buildings: McGraw, Goldwin Smith and Sage halls, Uris Library, Sage Chapel, the ILR Conference Center and A.D. White House. As photos of these buildings begin to include bits of adjacent buildings new flags will be added, and the model will spread across campus, Snavely said. Players also can create new "seeds" for the game by taking and uploading collections of photos of new buildings.