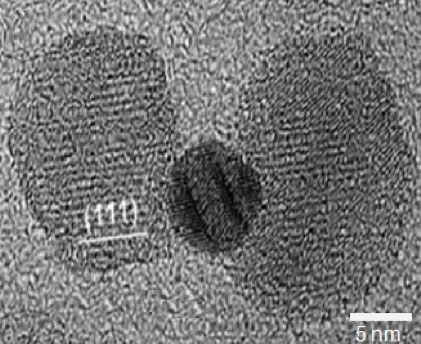 Dickson Kirui
A transmission electron microscope image of a gold hybrid nanoparticle that could be used to treat cancer. The gold in the middle is surrounded by two pieces of iron oxide.

Another weapon in the arsenal against cancer has been invented at Cornell: nanoparticles that identify, target and kill specific cancer cells while leaving healthy cells alone.

Led by Carl Batt, the Liberty Hyde Bailey Professor of Food Science, the researchers synthesized nanoparticles -- shaped something like a dumbbell -- made of gold sandwiched between two pieces of iron oxide. They then attached antibodies that target a molecule found only in colorectal cancer cells to the particles. Once bound, the nanoparticles are engulfed by the cancer cells.

To kill the cells, the researchers use a near-infrared laser, which is a wavelength that doesn't harm normal tissue at the levels used, but the radiation is absorbed by the gold in the nanoparticles. This causes the cancer cells to heat up and die.

The research is reported in the Feb. 15 online edition of the journal Nanotechnology.

"This is a so-called 'smart' therapy," Batt said. "To be a smart therapy, it should be targeted, and it should have some ability to be activated only when it's there and then kills just the cancer cells."

The goal, said lead author and biomedical engineering graduate student Dickson Kirui, is to improve the technology and make it suitable for testing in a human clinical trial. The researchers are now working on a similar experiment targeting prostate cancer cells.

"If, down the line, you could clinically just target the cancer cells, you could then spare the health surrounding cells from being harmed -- that is the critical thing," Kirui said.

Gold has potential as a material key to fighting cancer in future smart therapies. It is biocompatible, inert and relatively easy to tweak chemically. By changing the size and shape of the gold particle, Kirui and colleagues can tune them to respond to different wavelengths of energy.

Once taken up by the researchers' gold particles, the cancer cells are destroyed by heat -- just a few degrees above normal body temperature -- while the surrounding tissue is left unharmed. Such a low-power laser does not have any effect on surrounding cells because that particular wavelength does not heat up cells if they are not loaded up with nanoparticles, the researchers explained.

Using iron oxide -- which is basically rust -- as the other parts of the particles might one day allow scientists to also track the progress of cancer treatments using magnetic resonance imaging, Kirui said, by taking advantage of the particles' magnetic properties.

The work is funded by the Sloan Foundation and the Ludwig Institute for Cancer Research, which has been a partner with Cornell since 1999 to bring laboratory work to clinical testing.