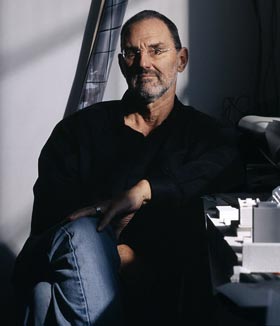 The New York- and Los Angeles-based architecture firm Morphosis will design a new building that will bring together several units of the Faculty of Computing and Information Science (CIS) in a collaborative working and learning environment.

The 100,000-square-foot building, to be named William H. Gates Hall, will be built on the current site of the Hoy North parking lot, on Campus Road across from Barton Hall. Gates Hall will house the Department of Computer Science, the new Department of Information Science, and research and teaching facilities for both departments, according to Daniel Huttenlocher, dean of CIS.

Morphosis founder and design director Thom Mayne, winner of the 2005 Pritzker Prize in architecture, will be the lead architect. A schematic design is expected in December, and construction will be completed by early 2014. Mayne was on campus in fall 2009 and taught an architecture studio as the Gensler Visiting Critic in the Department of Architecture.

"The CIS building will be the third Cornell building in the last five years designed by a Pritzker Prize-winning architect, the others being Milstein [Rem Koolhaas] and Weill [Richard Meier '56, B.Arch. '57]," University Architect Gilbert Delgado said. "The proposed building will serve as a gateway to the core campus from Hoy and Campus roads."

The Bill & Melinda Gates Foundation gave the university $25 million in January 2006 to support the construction of a signature building for information science.

"The building will be designed to support the collaborative and multidisciplinary research that has become increasingly important in the computing and information sciences," Huttenlocher said. "[The design will] encourage interaction, through the creative use of stairways and open areas to connect different parts of the building."

More than one-third of the building will be research and teaching labs, including specialized labs for cyber security, human-computer interaction, computational sustainability, robotics, computer vision and other research areas, he said.

A major feature of Gates Hall will be state-of-the-art collaborative laboratory spaces, Huttenlocher said, "with flexible places for interdisciplinary teams to work together with a mix of computers, work spaces and brainstorming areas. The architects have done a wonderful job of creating such inspirational work spaces in recent academic buildings that they have completed."

Delgado said, "Morphosis has a reputation for high-level innovation that goes well beyond conventional thinking about the built environment. For example, in San Francisco they designed a major federal building that is approximately 80 percent naturally ventilated. I believe something very exciting will come out this project that will expand our preconceptions of our campus."

The project, estimated to cost $60 million, will be funded without any external debt, using the Gates Foundation grant and other funds already in hand and additional funding to be raised, Huttenlocher said.

"Computer Science and Information Science touch on nearly every aspect of our daily lives, and this is reflected in broad interactions of both of these departments with other departments across the campus," he said. "The new building is designed to facilitate these cross-campus collaborations, with flexible space to be allocated for research projects that involve people from many departments who are working with faculty and students in Information Science or Computer Science. This is the real core value of the new building."

The new building for CIS will also free up space for the College of Engineering in Upson and Rhodes halls, Huttenlocher said.

The Gates Foundation, which supports initiatives in global health, education and access to digital information, became interested in Cornell's CIS program when Microsoft co-founder Bill Gates visited the campus in 2004 at the invitation of then-President Jeffrey C. Lehman.