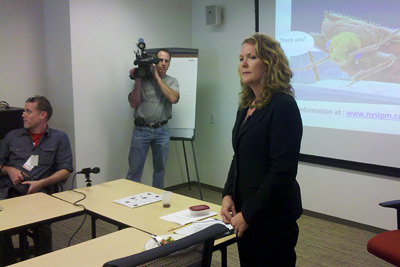 With the recent resurgence of bed bugs in New York City, record numbers of New Yorkers have a new appreciation for the expression "Don't let the bed bugs bite."

The problem has mushroomed to the point where almost every other phone call she receives is about bed bugs, said Cornell entomologist Jody Gangloff-Kaufmann, chair of the New York City Bed Bug Advisory Board, speaking to reporters Sept. 14 in Cornell's Industrial and Labor Relations Conference Center in Manhattan about what can be done about the bed bug crisis.

The pesky bugs do not carry dangerous diseases, and only about 30 percent of people react to their bites. However, bed bugs can trigger sleeplessness and anxiety in those combating an infestation, Gangloff-Kaufmann said, and fatigue is one of the greatest causes of fatal car accidents.

The key to eradication, she said, is awareness. "Awareness is prevention, prevention is the cure," said Gangloff-Kaufmann, who was one of 20 experts who helped develop guidelines for New York City, which include a bed bug task force and a broad education campaign.

To get rid of an infestation, one must "be absolutely vigilant," emphasized Gangloff-Kaufmann. She recommended intensive cleaning, informing the landlord and communicating with neighbors. For serious problems, an exterminator may be necessary. Unfortunately, the only way to know for sure if the bugs are gone is to sleep in the bed and not get bitten, a test no one wants to conduct.

Gangloff-Kaufmann discouraged New Yorkers from picking up discarded furniture on the street. What seems like a great freebie is actually a direct route to infestation, she said, adding that in Ithaca, for example, "there is this whole culture that embraces recycling, and that is great, but this is one of the avenues that bed bugs can use."

As one of the few specialists on nonagricultural issues in the Integrated Pest Management Program, Gangloff-Kaufmann stressed that there is no single solution to an infestation, not even pesticides, and that an integrated, tailored approach to each situation is needed.

Despite the magnitude of the problem, Gangloff-Kaufmann remained optimistic. "I think we're going toward heightened public awareness spearheaded by the media," she said in an interview. "Thank God, because we don't have the resources to deal with this in the public sector."

Erica Rhodin '12 is a writer intern at the Cornell Chronicle.