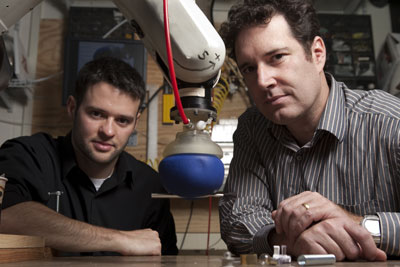 The human hand is an amazing machine that can pick up, move and place objects easily, but for a robot, this "gripping" mechanism is a vexing challenge. Opting for simple elegance, researchers from Cornell, the University of Chicago and iRobot Corp. have created a versatile gripper using everyday ground coffee and a latex party balloon, bypassing traditional designs based on the human hand and fingers.

They call it a universal gripper, as it conforms to the object it's grabbing, rather than being designed for particular objects, said Hod Lipson, Cornell associate professor of mechanical engineering and computer science. The research is a collaboration between the groups of Lipson, Heinrich Jaeger at the University of Chicago, and Chris Jones at iRobot. It is published online Oct. 25 in Proceedings of the National Academy of Sciences. 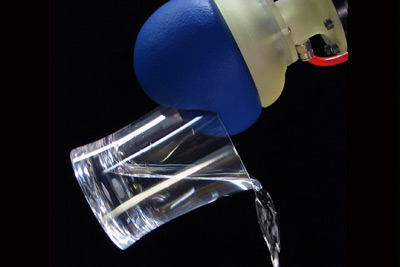 John Amend
The robotic gripper conforms to the shape of the item it is lifting.

"This is one of the closest things we've ever done that could be on the market tomorrow," Lipson said. He noted that the universality of the gripper makes future applications seemingly limitless, from the military using it to dismantle explosive devises or to move potentially dangerous objects, robotic arms in factories, on the feet of a robot that could walk on walls, or on prosthetic limbs.

Here's how it works: An everyday party balloon filled with ground coffee -- any variety will do -- is attached to a robotic arm. The coffee-filled balloon presses down and deforms around the desired object, and then a vacuum sucks the air out of the balloon, solidifying its grip. When the vacuum is released, the balloon becomes soft again, and the gripper lets go.

Coffee, Jaeger said, is an example of a particulate material, which is characterized by large aggregates of individually solid particles. Particulate materials have a so-called "jamming transition," which turns their behavior from fluidlike to solidlike when the particles can no longer slide past each other.

This phenomenon is familiar to coffee drinkers who have ever bought vacuum-packed coffee -- hard as a brick until the package is unsealed.

Jaeger explained that the concept of a jamming transition provides a unified framework for understanding and predicting behavior in a wide range of disordered, amorphous materials. All of these materials can be driven into a "glassy" state where they respond like a solid yet structurally resemble a liquid, and this includes many liquids, colloids, emulsions or foams, as well as particulate matter consisting of macroscopic grains.

"What is particularly neat with the gripper is that here we have a case where a new concept in basic science provided a fresh perspective in a very different area -- robotics -- and then opened the door to applications none of us had originally thought about," Jaeger said.

Eric Brown, a postdoctoral researcher, and Nick Rodenberg, a physics undergraduate, worked with Jaeger on characterizing the basic mechanisms that enable the gripping action. Prototypes of the gripper were built and tested by Lipson and Cornell graduate student John Amend, as well as at iRobot.

As for the right particulate material, anything that can jam will do in principle, and early prototypes involved rice, couscous and even ground-up tires, Amend said. They settled on coffee because it's light but also jams well, Sand did better on jamming but was prohibitively heavy. What sets the jamming-based gripper apart is its good performance with almost any object, including a raw egg or a coin -- both notoriously difficult for traditional robotic grippers.

The project was supported by the Defense Advanced Research Projects Agency.