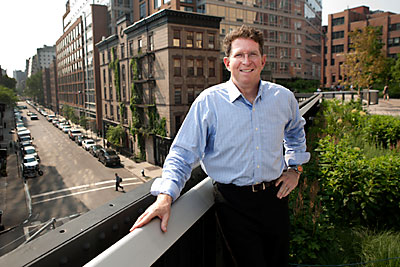 Robert Barker/University Photography
Robert Balder, executive director of AAP NYC, stands on a renovated section of the High Line on the lower west side of Manhattan.

As the new executive director of AAP NYC, Robert Balder '89 intends to expand the College of Architecture, Art and Planning's academic and alumni programs in New York City and foster professional development for students, through dialogues with AAP alumni and commissioner-level civic leaders.

He was appointed in April to advance and coordinate programs at the AAP studio and classroom facilities in Chelsea and optimize the college's presence in the city for its students, faculty and alumni.

"I'm raising awareness in the city that Cornell AAP is here, and that we are a laboratory for testing new ideas," Balder said. "There's a place for us here to have our voices heard and launch new relationships, which will help make it a compelling place for our students to come and learn."

With a Cornell B.S. in urban and regional studies, Balder has served as director of the Mayor's Office of Lower Manhattan Development and executive vice president of the New York City Economic Development Corporation.

"My role is to engage the people that can help our students find new ways to advance their goals, enhance their skills, and provide professional experiences to prepare them for the challenges they're going to meet in their careers," Balder said.

Among his other goals: Identify community-based initiatives in the city and "more meaningful opportunities for collaboration" within the Cornell community and with AAP's strategic partners in New York City; explore emerging communication technologies to link AAP's bases in Ithaca, New York City and Rome to each other and to other professionals around the world; and take steps toward securing an expanded and improved home to host the studios, seminars and events at the heart of the program.

"AAP's programming has a direct positive benefit on the city," Balder said. "Many of these students are going to find careers in large cities all over the world. New York City can prepare them for the global challenges that they are going to face."

Art students have studio classes in the city along with internships with a broad range of art galleries and cultural organizations during spring semesters, but Balder hopes that the program will be expanded to other times of the year.

"There's a great opportunity to explore the summer and fall semesters and enhance the students' skills while pursuing new artistic experiences," he said.

Year-round architecture programming in New York City includes professional training via internships and an intensive nine-week summer M.Arch.2 program, with Cornell and visiting faculty and guest lecturers from various institutions. After an orientation, students have six weeks of design studio working on real-life projects, followed by two weeks of seminars.

"For that very short period of time, we give them an immersive experience of New York City, challenge them with new design problems, and expose them to other ways of thinking," Balder said.

Of the 22 architects in the summer program, only two are from the New York City metro area and about half are international students. With curiosity about the changing city and its cultural experiences, Balder said, they have toured several sites, from a renovation at Carnegie Hall to a newly opened section of the High Line, the new Brooklyn Bridge Park, the Museum of Modern Art, the World Trade Center site, lower Manhattan's waterfront, DUMBO (Down Under the Manhattan Bridge Overpass) and other neighborhoods.

"By tapping into the limitless resources of New York City, students leave here with a deeper understanding of urban issues and the role of designers in shaping a global society," Balder said.

The AAP position has a three-year term and receives funding support from the Gensler Family Foundation.