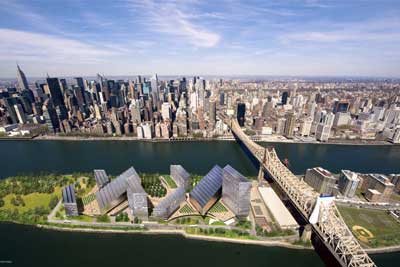 Photo illustration by Cornell, photograph by Getty Images
An aerial view of the proposed NYC Tech Campus on Roosevelt Island. 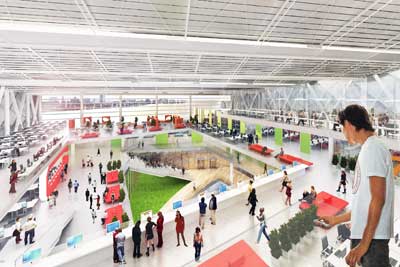 Cornell University
An artist's rendering of the main academic building. 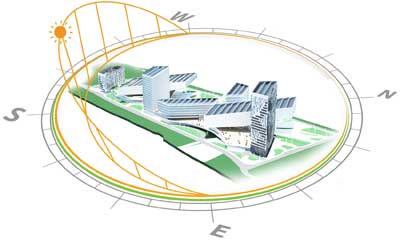 Cornell University
The proposed campus will be oriented toward the arc of the sun.

Oriented toward the arc of the sun, Cornell's proposed New York City Tech Campus on Roosevelt Island will capture a large, daily dose of solar power and will use the Earth's generous internal, thermal power as an additional energy source. The main educational building, a home for the Cornell and Technion - Israel Institute of Technology partnership, is being planned to harvest as much energy from the campus site as it consumes: In the parlance of energy experts, it will be "net-zero energy."

If built today, the campus's proposed 150,000-square-foot core academic building would be the largest net-zero energy building in the eastern United States and among the top four largest such buildings in the United States.

"This proposed campus goes beyond buildings and reduced energy use -- it's a living laboratory that brilliantly anticipates and integrates forward-thinking design and building technologies," says Kent Kleinman, Cornell's Gale and Ira Drukier Dean of Architecture, Art and Planning. "Forget the cliché 'game-changer,' this New York City campus is more than that. It is the ideal plan for creating an educational environment to train future engineers and designers in the science of sustainability for decades to come. And it will make New York City home to one of the nation's premier green buildings."

Physically speaking, the main academic building will have a high-performance envelope; will harvest daylight to minimize the use of artificial light; and will employ demand-controlled ventilation. And it will be built with the use of recycled material.

Beyond the LEED Platinum core academic building, the remainder of the 10-acre campus -- which is being planned to include residences for faculty, staff and graduate students, public atria and corporate space -- is designed to achieve LEED Silver or higher certification. It will exceed the energy performance of similar baseline buildings by at least 30 percent -- a goal routinely exceeded on Cornell's Ithaca campus. In addition, the Roosevelt Island campus plan includes elements to treat storm water and to create community gardens.

To help build a comprehensive energy solution, Cornell partnered with Distributed Sun out of Washington, D.C. Jeff Weiss, managing director of Distributed Sun and a Cornell alumnus, is one of the founders of the solar energy development company, which provided creative and innovative suggestions in the planning of the core building. The proposed campus design was developed by renowned architecture and engineering firm Skidmore, Owings & Merrill, a leader in sustainable design and planning. James Corner Field Operations, a leading-edge landscape architecture and urban design practice, also in New York City, designed the landscaping plan, which includes "green" concepts such as rain gardens and bioswales, green walls and roofs, and reforestation to create a small, new urban forest. And both the National Renewable Energy Laboratory and the New York State Energy Research and Development Authority participated in the conceptualization of the proposed campus's renewable energy and energy efficiency aspects.

Less is more: The initial phase of the proposed campus will require only a quarter of the electricity from the grid, emit half of the greenhouse gas, and require less than half the fossil fuel to power, heat and cool than a comparable new, conventional campus that meets current energy code.

The campus as curriculum: The proposed campus's faculty and students will be able to incorporate current research into campus design and operation. Interdisciplinary teams of architects, engineers, computer scientists, builders and urban planners will gather information and integrate the updated technology.

And the campus will take full advantage of power from the sun. It has been designed to face solar south, and its buildings will be situated to avoid shading each other. Electrical power from a fuel cell will further reduce the impact of the campus on the supply-limited electric grid.

The structures will be heated and cooled by a central, geothermal heat pump system, which provides heat more efficiently than boilers or electricity. Heat generated by the fuel cell will also be gleaned to supplement the non-academic campus needs, for added economy and energy savings.

The geothermal system -- an array of 400 wells spread out over four acres -- will use 500-foot deep holes to extract heat from the earth to warm buildings in the winter. During the summer, the system will transfer excess heat from inside the buildings back into the ground to provide air conditioning.

On Roosevelt Island, Cornell will continue its tradition of openness to the community and the public. The NYC Tech Campus plan features over 500,000 square feet of green space and breathtaking views of the Manhattan and Queens waterfronts. The campus will be open and accessible to residents and visitors and would become one of New York City's largest green spaces open to the public.

For the Big Red, going green is nothing new. Cornell's award-winning 2009 Climate Action Plan provides a road map for the Ithaca campus to reduce its carbon emissions to achieve carbon neutrality by the year 2050. In two years, Cornell reduced its campus greenhouse gas emissions by 25 percent through a retooled, efficient combined heat and power plant and by ending the use of coal. And the campus is continuing its aggressive energy conservation initiatives.

Cornell and Technion will partner in groundbreaking tech campus