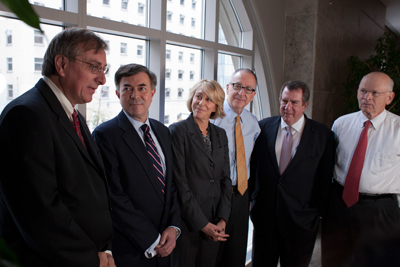 As Cornell finishes preparing a proposal for a New York City tech campus, the university's governing body has thrown its full weight of support behind it.

During a special meeting Oct. 12 of the Cornell Board of Trustees at Weill Cornell Medical College in New York City, the board voted unanimously to endorse Cornell's NYC Tech Campus plan. The official proposal is due to Mayor Michael Bloomberg's office Oct. 28.

"Today is an extraordinary day for Cornell University -- not just for 2011 but for the next 150 years," said an exuberant President David Skorton, minutes after the meeting adjourned. "The board of trustees has unanimously and enthusiastically endorsed the proposal for Cornell to create the tech campus of the future right here in New York City."

Cornell, along with many other institutions, is submitting a proposal in response to Bloomberg's vision for a new campus that would create jobs and spur high-tech industry.

Skorton was flanked by key board leadership, whom Skorton described as the group that helped lead the way to garner support from within and outside the university for the new campus.

"I have not seen this level of enthusiasm by any action taken by this board in the nine years I've been on it," said Bob Harrison '76, who will succeed Peter Meinig '61 as chairman in January. "I'm proud to have been part of what I think is a historic decision."

Meinig said the board had "done its homework" over the last 10 months regarding the proposal.

Jan Rock Zubrow '77, chair of the board's executive committee, pointed out that a Cornell tech campus would benefit the city in numerous ways, from creating jobs to bringing Cornell science and expertise into industry settings.

"It is a logical extension of what we already do," Zubrow said. "Part of the reason why the board is so excited is that it's such a natural fit." This includes, she said, an existing reputation for tech transfer; the 50,000 Cornellians that reside in the New York metropolitan area; and, of course, Weill Cornell Medical College and the many other programs across all the colleges that have sites in New York City.

The research, startups and spinoffs to be generated from the Cornell tech campus will underscore New York as "the great crossroads city," said trustee Andrew Tisch '71. "There is such dynamism, enthusiasm and energy here, and we believe New York needs to be the tech center of the 21st century."

In the months since Cornell first announced its intent to win the tech campus bid, alumni, faculty, students and many others have publicly supported the initiative -- a level of enthusiasm that Provost Kent Fuchs called "spectacular." From bloggers expounding on why Cornell is the right choice and alumni-created petitions that have garnered thousands of signatures to official support from the Student Assembly, the response has been grassroots-based and very gratifying, Fuchs said.

"Faculty from universities [around the country] are saying, 'Cornell is the one,'" Fuchs said. "And now we have unanimous support of all the committees of the trustees and the full board, and we're just so excited."